The Many Roles of Vitamin A 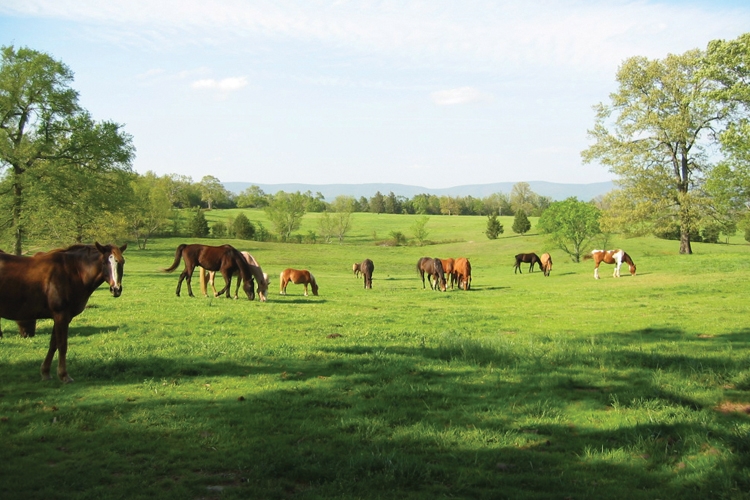 Green grass is an excellent source of carotene, which is converted to vitamin A in the intestinal wall. 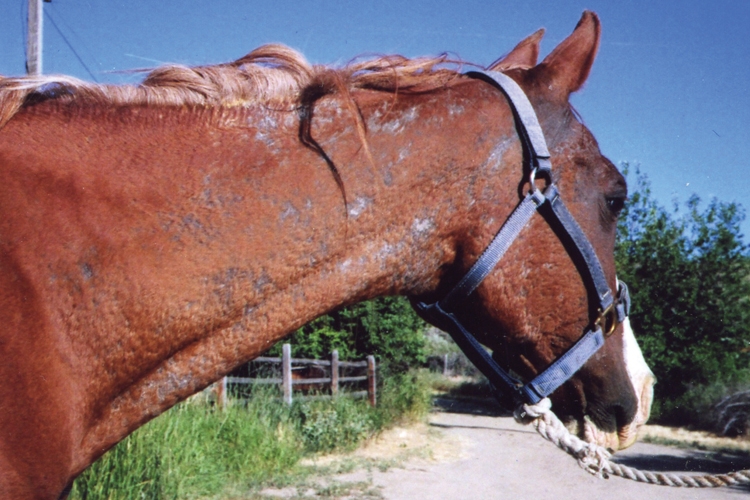 Vitamin A is important to the health of epithelium cells, which includes skin. 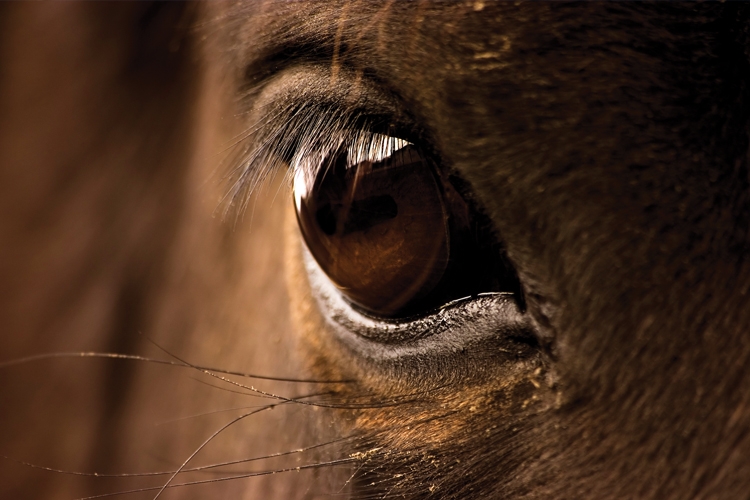 Once in the body, vitamin A becomes retinol which helps facilitate vision. 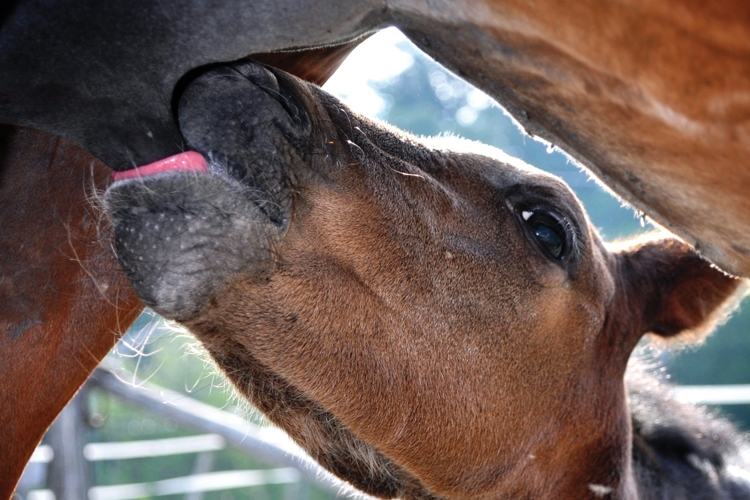 Vitamin A passes from the dam to the fetus, but not enough to have much stores in the foal’s liver when it is born.
Click for full size
Previous Next

Vitamins are organic compounds required in trace amounts in the diet to help regulate body functions. Various vitamins play crucial roles in body maintenance and function. Dr. Kathleen Crandell, Equine Nutritionist, Kentucky Equine Research, says vitamin A is probably one of the most important because it has so many different roles in the body. “Vitamins are either fat-soluble or water-soluble, and this just refers to the way each vitamin is handled in the body,” she says.

What Is Vitamin A?

“Vitamin A is just a general term for many different forms of retinol. After it’s absorbed by the body, it goes through various forms as it goes from storage to distribution to target cells. Carotene in green plants is converted to vitamin A in the intestinal wall. Green grass is an excellent source of carotenes. The greener the color, the more carotenes in that plant,” says Crandell. Horses on green pasture or fresh alfalfa hay get plenty of vitamin A.

“The most abundant source of vitamin A is from beta-carotene,” she says. “When a horse eats grass, a certain enzyme within the cells in the intestinal tract convert carotene to vitamin A, and it is absorbed into the body as vitamin A, though some carotenes are absorbed directly.

“Sometimes in humans, if they eat too much beta-carotene, they get a yellow or orange tinge to the skin. This doesn’t happen in horses because they have poor absorption of the intact beta-carotenes.”

Horses have been eating large amounts of carotene in forages for a long time. “They will never get vitamin A toxicity from eating naturally-occurring carotenes, due to a limited amount of an enzyme (called Beta-carotene 15, 15’ dioxygenase) to convert the carotenes to vitamin A,” says Crandell.

“From beta-carotene, the horse can actually get two retinols, which is the form of vitamin A within the body once it is absorbed. After going through the intestinal wall cells, it goes into the lymphatic system - rather than directly into the bloodstream - and from the lymph it goes into the liver. In the liver, it becomes bound to the retinol-binding proteins and then can be distributed throughout the body.

“Some vitamin A is recycled in the body and some is used up, so there always needs to be some vitamin A in the diet to replace what is used.”

The Role Of The Liver

Functions Of Vitamin A In The Body

One of the many important roles played by vitamin A is to help facilitate vision. This is obvious from the term used for vitamin A once it is in the body; it becomes retinol. The retina is one of the major structures of the eye. “Vitamin A is crucial to the whole function of the eye as it receives light, and is thus very important in vision,”
says Crandell. “Vitamin A is also important to health of epithelium cells, which includes skin, the lining of the intestinal tract, lungs, reproductive tract, and the eye.”

Since vitamin A affects so many things, deficiency (or extreme excess) of this vitamin can have serious repercussions, and the effects are similar. “The skin doesn’t have normal turnover of skin cells, so there is thickening of the skin,” she says. “There will also be thickening of the intestinal wall, which interferes with absorption of nutrients.

“It is also important for growth and for remodeling of bones. Vitamin A helps control the two types of bone cells: osteoblasts, which are the bone cells that are growing; and osteoclasts, which are the bone cells that break down,” says Crandell. “There must always be some bone cell turnover to have healthy growth of bones. If there is not enough vitamin A, or an excessive amount of vitamin A, the osteoclasts don’t work properly and this results in thickening of the bone – but not in a healthy way like increasing bone density. The bone just becomes shorter and thicker.

“Vitamin A also helps with degradation of aminoglycans and synthesis of proteoglycans, which affect cartilage. For healthy cartilage, a young, growing horse needs adequate vitamin A.

“This vitamin also affects growth hormone regulation, which is also important for the growing horse. This is one reason we see slow growth/poor growth in young horses that are deficient in vitamin A,” Crandell explains.

Vitamin A is important for proper embryonic development. “A deficiency can cause embryonic loss if the embryo is unable to develop properly. Vitamin A also affects reproduction because it is crucial for a healthy lining in the reproductive tract. It also helps with production of sperm cells (spermatogenesis) and eggs, and is important for the cells in the placenta, as well as fetal growth,” she says.

If a mare doesn’t have enough vitamin A, or has too much, the unhealthy lining of the reproductive tract also affects estrus. “This vitamin is also important in production of steroid hormones, in both males and females – such as progesterone and estrogen. Vitamin A also passes from the dam to the fetus, but not enough to have much stores in the foal’s liver when it is born. Foals are not born deficient, but they need to have vitamin A in their diet from birth onward. The mare’s milk is a good source of vitamin A. There is a lot of vitamin A in milk,” she explains.

Interactions With Other Nutrients

A well-balanced diet is essential for good health in order to provide all the necessary nutrients, including vitamins. Deficiencies (or excess) of some nutrients can affect absorption and function of others. “If the body doesn’t have enough protein, for instance, many things are affected, and one of those effects is that the body can’t transport vitamin A around the body. It needs those retinal-binding proteins that carry it in the bloodstream,” says Crandell.

There must also be enough fat in the diet to facilitate movement and absorption for fat-soluble vitamins like vitamin A and E. “Carotene and vitamin A need fat to transport them and to be absorbed. The typical diet of a horse grazing at pasture does not include much fat; grass is usually between 2-5% fat. This is enough for what the horse needs as far as fat-soluble vitamins are concerned,” she explains.

Zinc also interacts with vitamin A. “If a horse is deficient in zinc, that horse is often deficient in circulating vitamin A, as well. We think it’s because zinc is necessary for production of retinal-binding protein. Zinc is also a component in hundreds of important enzymes in the body, so adequate amounts of this trace mineral are crucial. If there are good zinc levels in the bloodstream, there are usually good levels of vitamin A as well. Zinc and vitamin A are not antagonistic,” says Crandell.

“Copper, on the other hand, has an inverse relationship with vitamin A. High copper levels affect stability of vitamin A, but copper and zinc are also involved in the enzyme that converts beta-carotene to retinol (vitamin A) in the digestive tract.”

Vitamin E works hand-in-hand with vitamin A. “They work together to a certain point, so if the vitamin A is a little low and vitamin E levels are higher, the vitamin E can compensate; you’d be less apt to see some of the problems that might occur with vitamin A deficiency. If you get too much vitamin A, however, it starts affecting vitamin E’s ability to protect body cells against oxidation. Excess vitamin A also decreases the body’s ability to absorb vitamin E in the digestive tract,” she explains.