Horseman Jose Carrizales had a breakthrough year in 2020, beginning at Louisiana Downs, where he won 23 races to claim his first career training title. 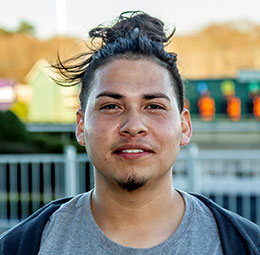 Jose Carrizales will be back at Louisiana Downs this year to defend his leading trainer title. © Hodges Photography

But it was Ss Classyjess, owned by Edgar Rosales, who became the star of the Carrizales barn. Now 6-years-old, the daughter of Rock Solid Jess began her 2020 campaign with a runner-up finish in the Harrah’s Stakes before triumphing in the Swift Stakes on January 25. She won the Miss Retama and Live Oak Stakes at Retama Park and captured the Nevill and Yellow Rose of Texas at Lone Star Park. The intrepid mare returned to Louisiana to cap off her year with a gate-to-wire victory in the Sam’s Town Stakes at Evangeline Downs on December 12.

“She is amazing,” stated Carrizales. “She is small, but very quick, and really knows how to take care of herself. You don’t get horses like this very often and we are very proud of her.”

Carrizales has a farm in Kaufman, Texas and is ready for the 2021 Louisiana Downs meet.

“Getting the leading trainer title in Bossier City really helped us,” he added. “I have some new owners as a result of our success, including seven 2-year-olds paid into the Mardi Gras Futurity.”

Rosendo Valdez, Jr. is looking forward to the upcoming racing season as well. He trains for his father, Rosendo Valdez, who won the leading owner title last month at Evangeline Downs.

“My family lives in Texas, but we love racing in Louisiana,” said Rosendo Valdez, Jr. “(Former jockey) Ray Mayo got us involved and we enjoy working with him. He congratulated us on winning the owner title at Evangeline Downs and we hope to get off to a good start here.”

Last year’s leading rider, Ricardo Hernandez, Jr. will be prominent, once again, as first call rider for the Carrizales barn. He won 34 races here last year before breaking his wrist at Delta Downs and missing several months of action. David Alvarez finished the Louisiana Downs meet in second place with 29 wins, before soaring as the top nation’s Quarter Horse jockey with 111 victories throughout 2020. The competitive jockey colony will also include 2019 leading rider, Everardo Rodriguez and his younger brothers, Jose and Leo.

Another jockey to watch will be Juan Garcia, Jr., who had his best year ever, winning 83 races and eclipsing the $1 million mark in earning for the first time since he began riding in 2011. He credits his sister, Wendy Garcia, brother in-law (jockey) Modesto Pina as well as trainer Trey Ellis for their support. Garcia won the 2018 Mardi Gras Futurity aboard Guidry Pride II, who is trained by his sister. That victory has a special place in his heart.

“It was wonderful,” recalled Garcia. “Nothing is more important than family and we all believe in each other! Wendy and Modesto always say hard work pays off in the end and that is very true! Last year, Trey helped me so much and I am very grateful to him as well.”

About Louisiana Downs
Located near Shreveport in Bossier City, Louisiana, Louisiana Downs opened in 1974 and was purchased by Caesars Entertainment in December 2002. With annual Thoroughbred and Quarter Horse racing seasons, the track is committed to presenting the highest quality racing programs paired with its 150,000 square foot entertainment complex offering casino gambling, dining and plasma screen televisions for sports and simulcast racing.

« Back to Home
Categories: The News, Track Info