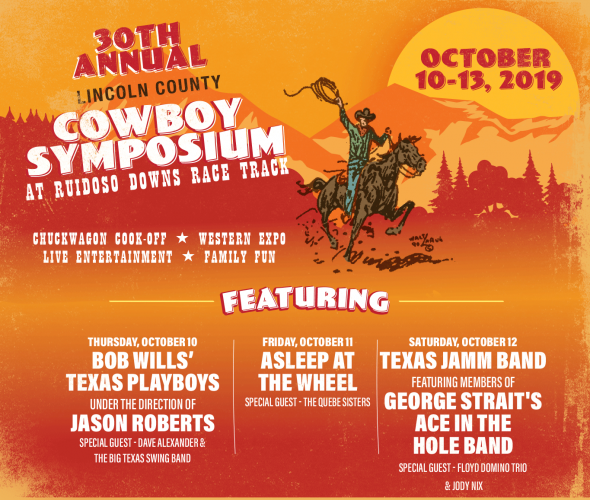 "This is a special occasion marking our 30th year," music director Dave Alexander said. "The ownership team at Ruidoso Downs wanted this to be a special year highlighting the storied history of this iconic event, and what a tremendous lineup of southwestern swing artists and musicians we have put together for this celebration."

The most awarded band in the history of western swing music returns to the Cowboy Symposium when Ray Benson’s Asleep at the Wheel makes an appearance on Friday evening, October 11th with special guests The Quebe Sisters.

"There’s not another band in the swing music genre that compares to Ray Benson’s Asleep at the Wheel," Alexander said. "As the Symposium celebrates a special anniversary, it’s only fitting that we’ve included this legendary group of performers on Friday night. Plus, adding the hottest group in today’s swing music, The Quebe Sisters, to the Friday night concert makes that evening even more special."

The Cowboy Symposium begins on Thursday evening, October 10th, with the signature band that inaugurated the Cowboy Symposium back in 1990, only with new players. Bob Wills’ Texas Playboys Under the Direction of Jason Roberts take the stage to start the weekend.

"When you hear, ‘The Texas Playboys are on the air,’ you know that you’re going to be in for a good time," Alexander said. "Jason has accepted the responsibility of carrying on the Texas Playboy tradition. This is a brand-new group of players who all believe in that special sound and feel that only the Texas Playboys can deliver."

Dave Alexander and the Big Texas Swing Band will also be appearing on Thursday night, and there will be a special VIP reception in advance of the show to commemorate the Symposium’s 30th anniversary.

On Saturday evening, October 12th, the Symposium welcomes Texas Jamm Band, featuring members of George Strait’s Ace in the Hole Band, for their Cowboy Symposium debut. Special guests that evening include the Floyd Domino Trio along with Jody Nix and the Texas Cowboys.

"These are the talented players that toured for a generation with George Strait," Alexander said. "Anyone who has ever attended a George Strait concert knows how special the Ace in the Hole Band is to country and swing music. They are going to fill-up the dance floor all evening, followed by Jody Nix and the Texas Cowboys — the most popular band in the history of the Lincoln County Cowboy Symposium."

Many of the Symposium’s regular events include the World Champion Chuckwagon Cookoff, more than 100 vendors with western products, equine seminars, three daily music stages and more family activities. Tickets for all events associated with the Symposium are scheduled to go on sale June 3rd.