Had To Be Ivory Named QROOA 2019 Horse of the Year

AJAX, ONT—JANUARY 26, 2020—Ontario-bred Had To Be Ivory was named the 2019 Horse of the Year at Ajax Downs by the Quarter Racing Owners of Ontario, January 25 at its annual awards banquet.

Owned and bred by Carol and Jaime Robertson of Hillsburgh, ON and trained by Bryn Robertson, Had to Be Ivory won three of five starts as a 4-year-old in 2019 including the Picov Maturity and the Ontario Bred Maturity.

The son of Ivory James from the Robertson's stakes winning Ajax Downs mare Had To Be Fandango, Had To Be Ivory defeated three-time reigning Horse of the Country Boy 123 (2016, 2017, 2018) twice on the track last season before that rival defeated him in the Alex Picov Memorial Championship in October. 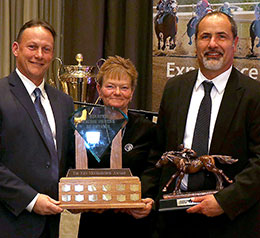 Tony Phillips, the regular rider of Had To Be Ivory, won High Point Jockey of the 2019, based on the QROOI point system, and his 36 winning rides were the most in one season in his career.

"It's been a blast, I'm on top of the moon right now," said Phillips. "It wasn't that real until I received the award tonight, I'm feeling quite blessed right now."

Jason Pascoe from Pontypool won his first High Point Trainer award and sent out the winners of 35 races.

The QROOI also recognized Ajax Downs' General Manager Emilio Trotta with the Ken Mucklestone Award, presented to a person who represents, promotes and upholds the integrity of Quarter horse Racing. Dave Brown, supervisor and property manager, received the George Egerton Memorial Award, given to an individual who goes above and beyond the call to help all people at the track.