Romero had been battling a series of health issues going back to 1983, when a near-fatal sauna explosion at Oaklawn Park burned 60% of his body. While receiving blood transfusions during skin graph operations, he received blood tainted with hepatitis C. The blood transfusions saved his life, Romero said, but the hepatitis severely damaged his liver.

He would continue to face a barrage of other health issues, including the stomach cancer while he was being screened as a candidate for a liver and/or kidney transplant, according to his brother Gerald Romero.

"He is the toughest man I've ever seen in my life," Gerald Romero said. "Believe me, for all he's been through, he's in a better place." 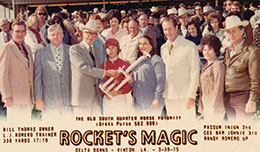 Romero was the leading Thoroughbred rider at 10 different tracks 21 time in his career. From 1985 through 1989, his mounts earned over $35 million. He retired with 4,294 victories and earnings of over $75 million in earnings. Romero was inducted to the National Museum of Racing and Hall of Fame in 2010.

Among the top Thoroughbred's he rode were undefeated champion Personal Ensign and Go for Wand.

He was born December 22, 1957, in Erath, Louisiana. His late father, Lloyd J. Romero, was a stern, demanding state trooper who trained Quarter Horses and Thoroughbreds. The middle of five brothers, young Randy began riding in races at age nine, tacking 69 pounds in unsanctioned bush-track matches. The 1978 horse movie “Casey’s Shadow” was loosely based on his family’s racetrack adventures.

As soon as he was legally old enough, at 16 in 1973, Romero rode his first pari-mutuel race at Evangeline Downs. He quickly rose through the ranks on the Louisiana circuit. He rode LQHBA Hall of Fame inductee Rocket's Magic.

Rocket's Magic, a son of Rocket Wrangler, was a magical racehorse for the entire Romero Family. His father trained the sorrel colt for owner Bill Thomas and his brother Gerald was his assistant.

Rocket's Magic went on to win the Old South Futurity at Delta and the FQHA Futurity, before winning his trial and running third in the 1975 All American Futurity at Ruidoso Downs.

Funeral arrangements will be announced as they become available.