Trainers Barbara Alcantara and Kenneth Weeks were tied for second with six wins each.

Hamilton took the leading jockey honors by riding 12 wins from 71 mounts with earnings of $187,305, a 17% win clip. The leading jockey was also honored by track officials for riding his 2000th Quarter Horse winner during the summer meet at Delta Downs. 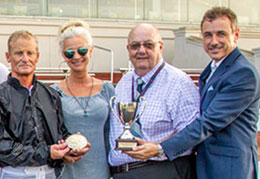 Luis Vivanco had 11 wins while Damian Martinez, Luciano Duenez and Rolando Cabrera had eight wins apiece to tie for third.

Also on Saturday (Sep 8) at the Fair Grounds, Hamilton was feted by members of the jockey colony, horsemen, his wife, Sharon, and several of his grandchildren for a belated celebration of the milestone. Hamilton was emotional as he thanked a host of people for their support.

"It’s so amazing to be surrounded by so many people," said Hamilton. "My success is owed to God, my owners, trainers, grooms, gate crew and my wife who has put up with so much! I will continue to ride and hope to win as many races as possible!"

Rogelio Marquez, Jr. and Jose Ortiz are the owners of four winners apiece to tie for the Fair Grounds Leading Quarter Horse owner of 2018.