LOS ALAMITOS, CA—MARCH 19, 2020, 2020—Ex-racehorse DM Legacy, a gelding by champion Carters Cartel, visited the winner’s circle after a nice victory at Los Alamitos for trainer Patricia Visscher and owners/breeders Edward and Theresa DeNike back in 2014.

Many years later, DM Legacy is still loving the thrills of athletic competition in Southern California. 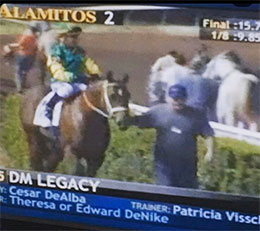 Having celebrated his eighth birthday in late February, "Lego", as he’s affectionately known as in his new career, is now part of dynamic duo with high school freshman and young barrel racer Rylea Ryan, the granddaughter of Los Alamitos-based trainer Charles Treece.

Rylea and Lego have found success and a lot of fun times competing in the Lunde Enterprises Barrel Race Series. Together they’ve faced teams that have gone on to the National Finals Rodeo. Rylea, who grew up visiting the track with her grandfather, is also a part of the California High School Rodeo Association and West Coast Barrel Racing Association, which hosts events for participants of all ages and skill levels.