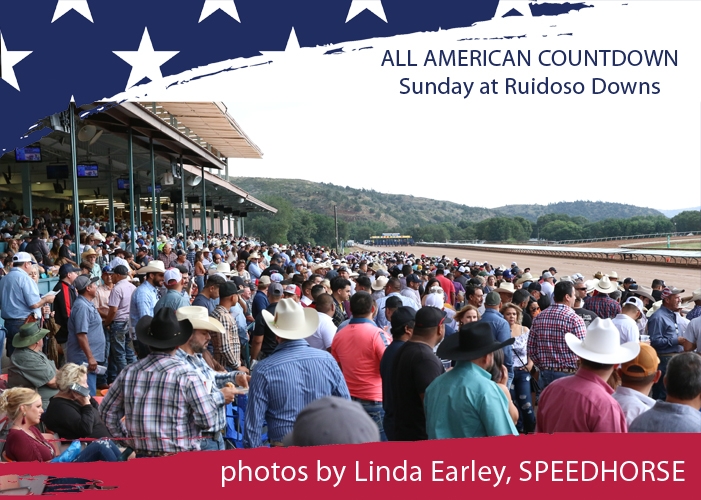 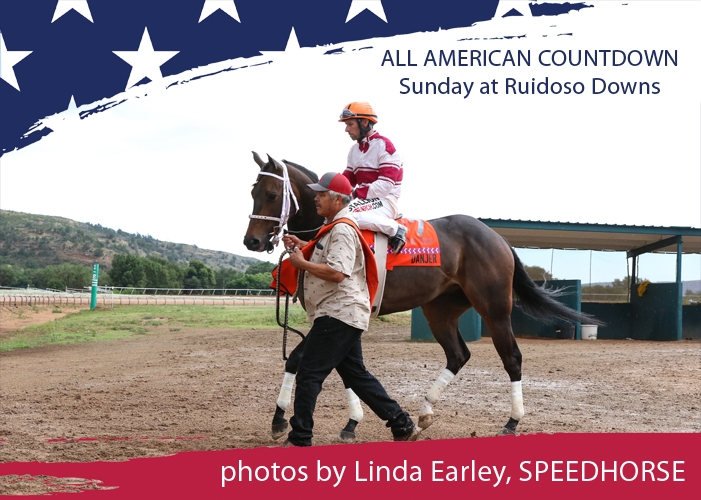 Danjer before the First Down Dash Stakes begins 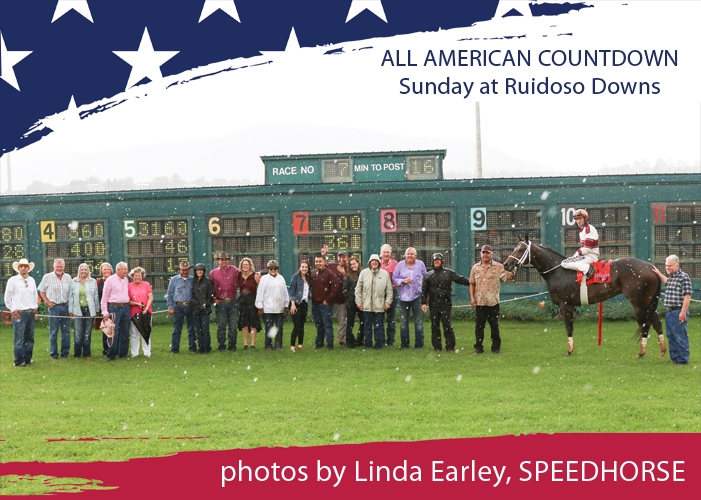 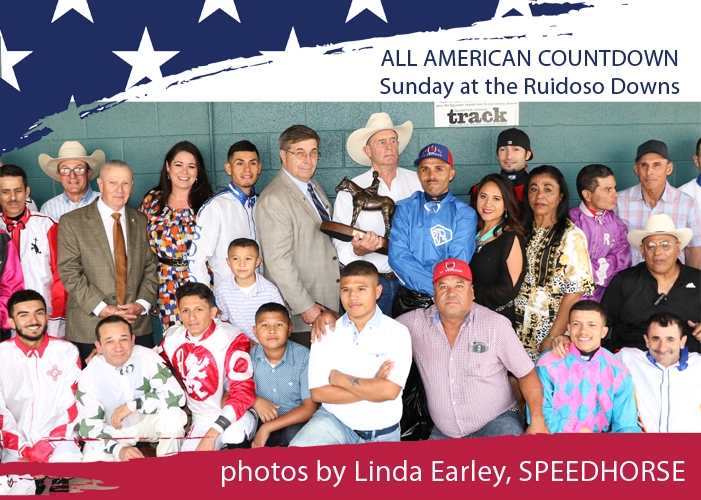 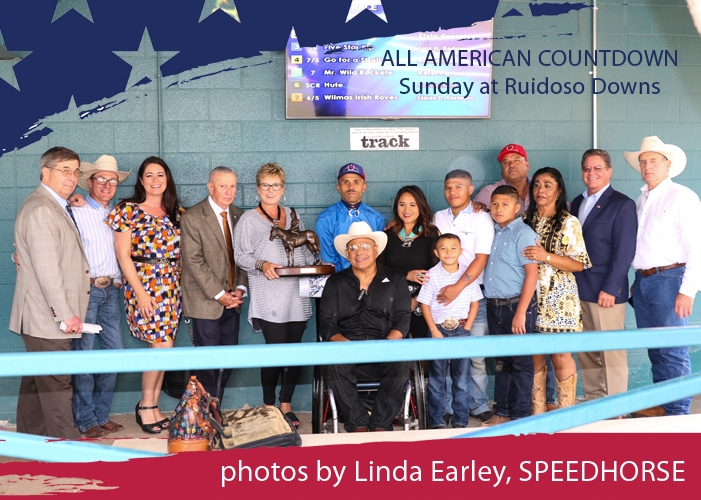 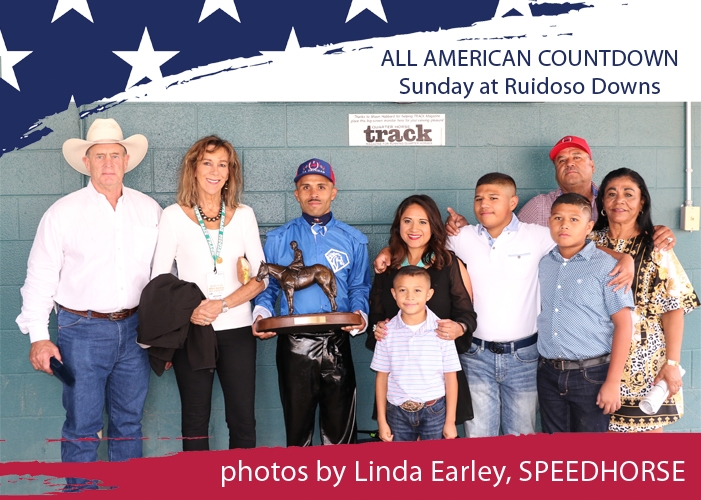 Esgar Ramirez with his family, John Bachelor and Linda Manion 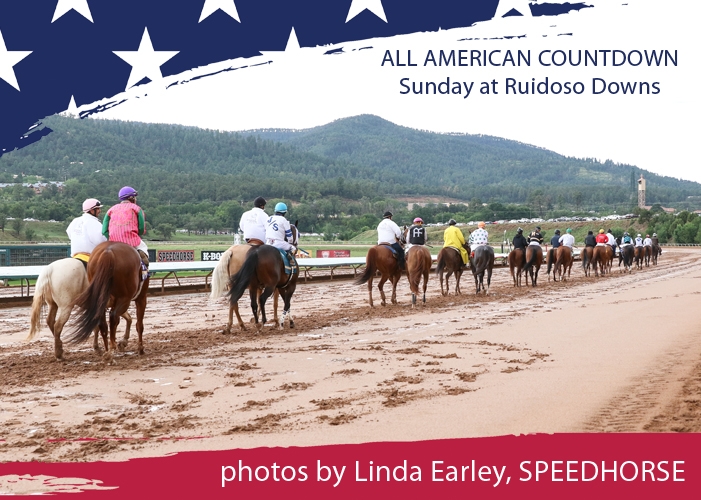 Post parade in the of the All American Gold Cup-G1 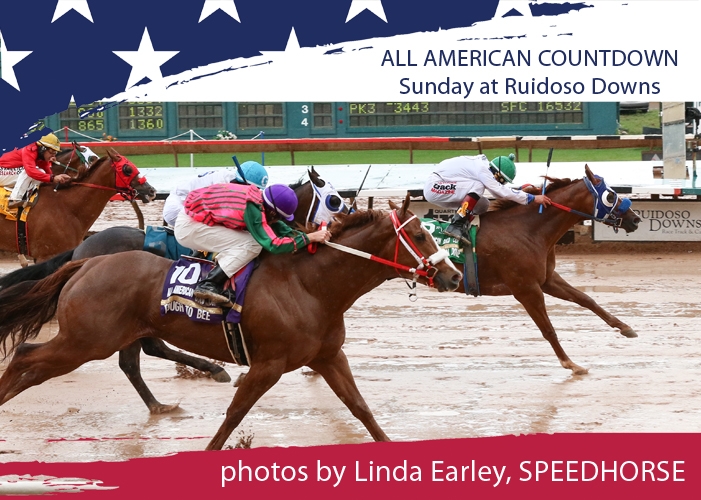 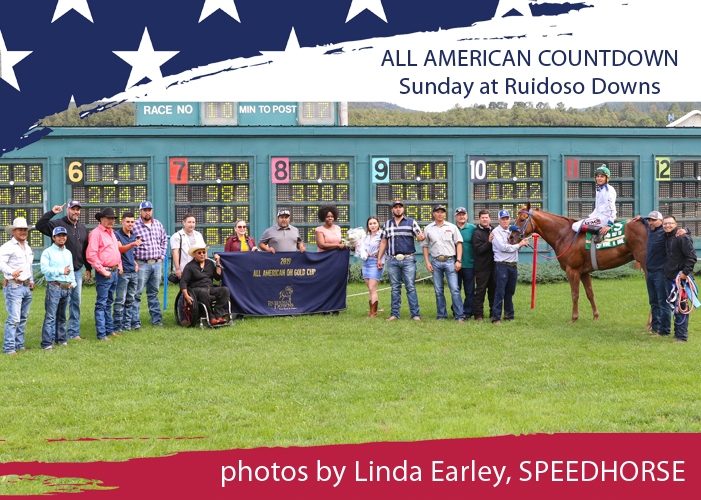 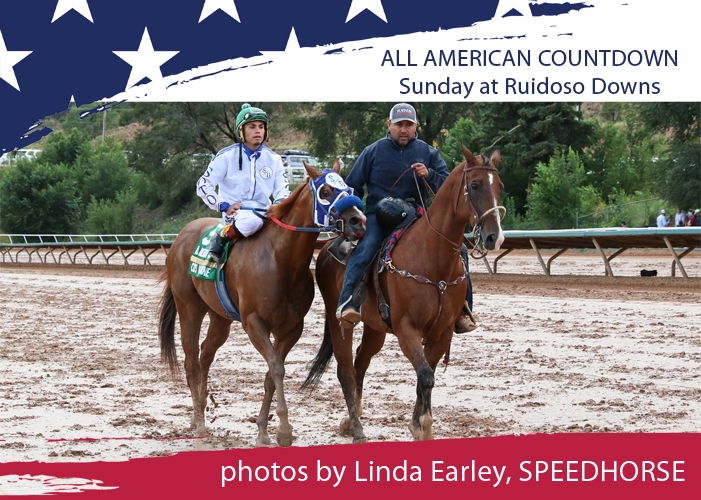 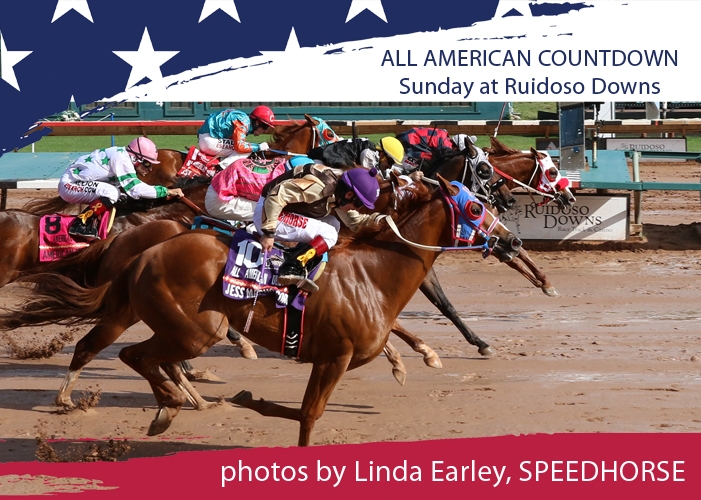 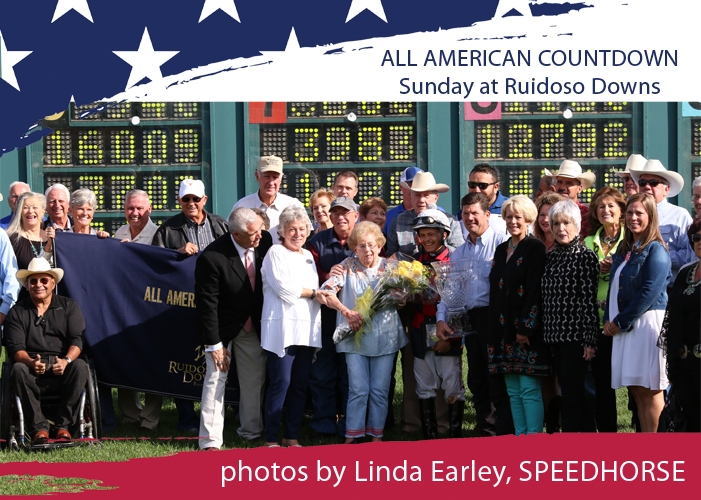 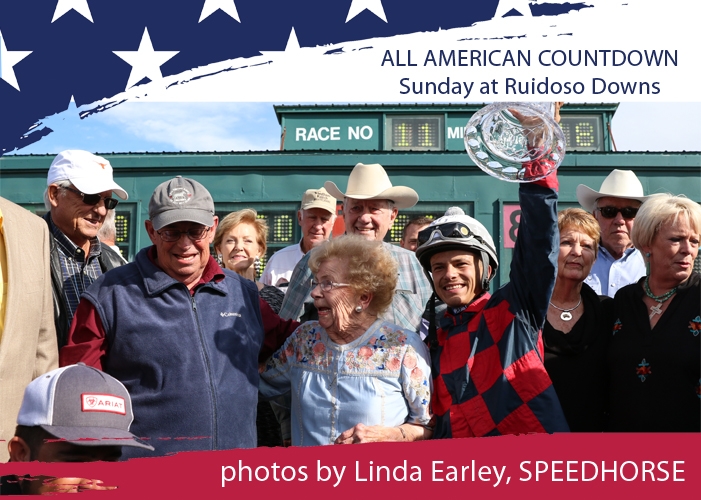 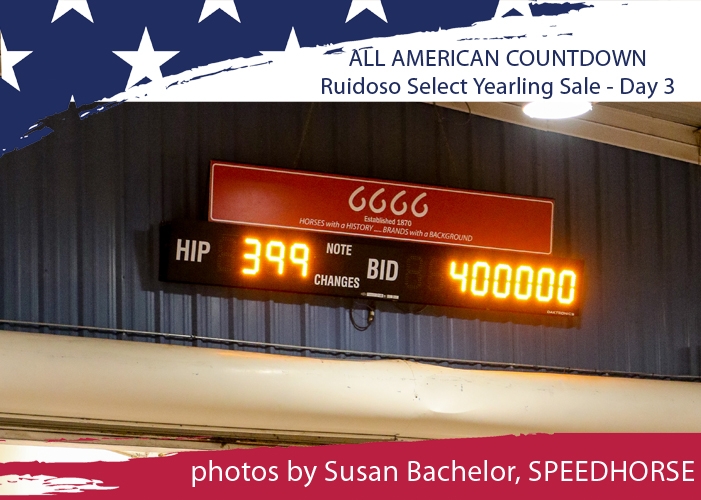 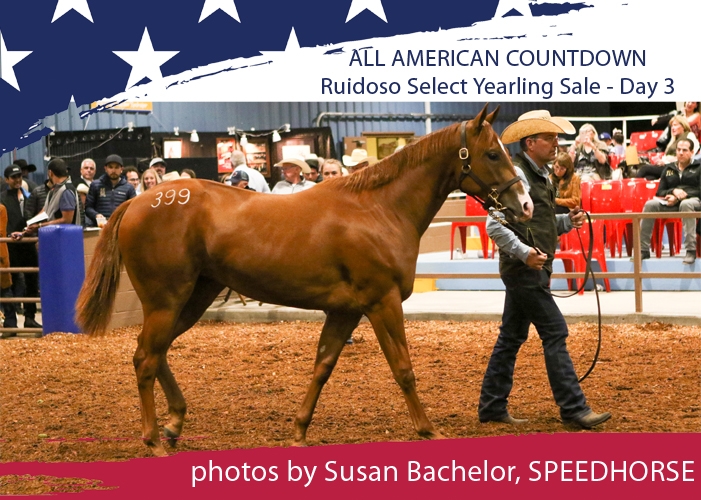 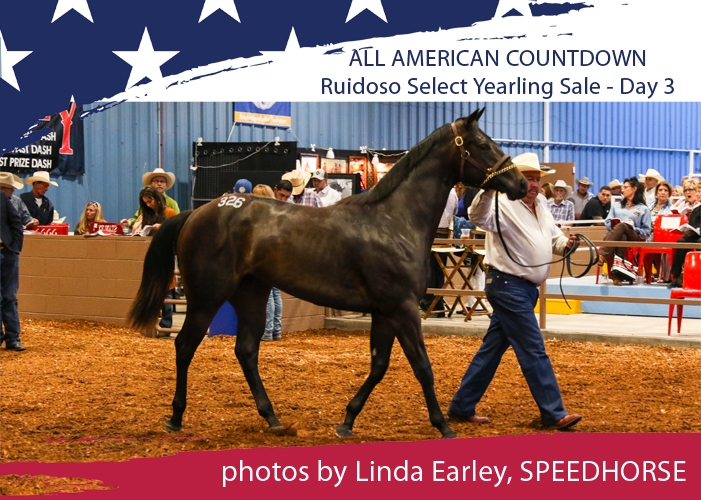 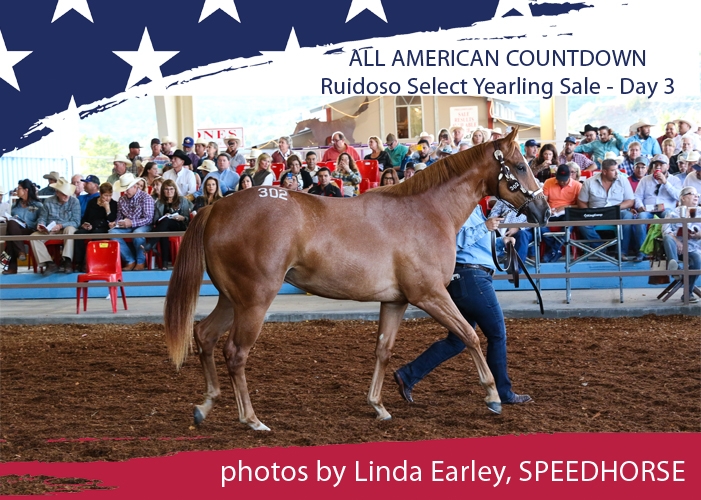 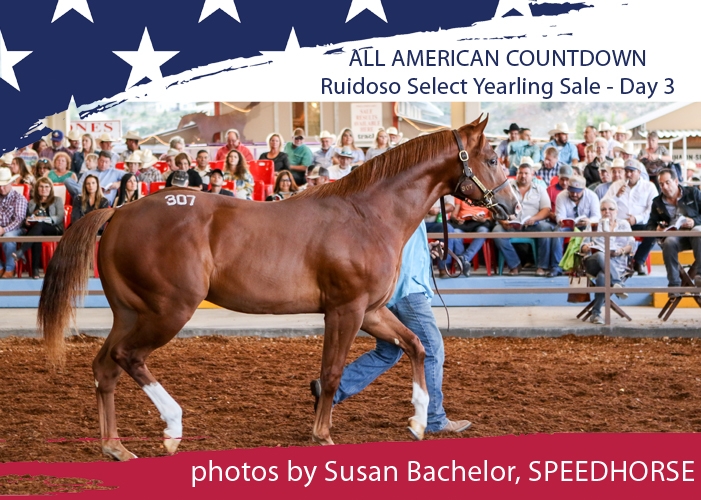 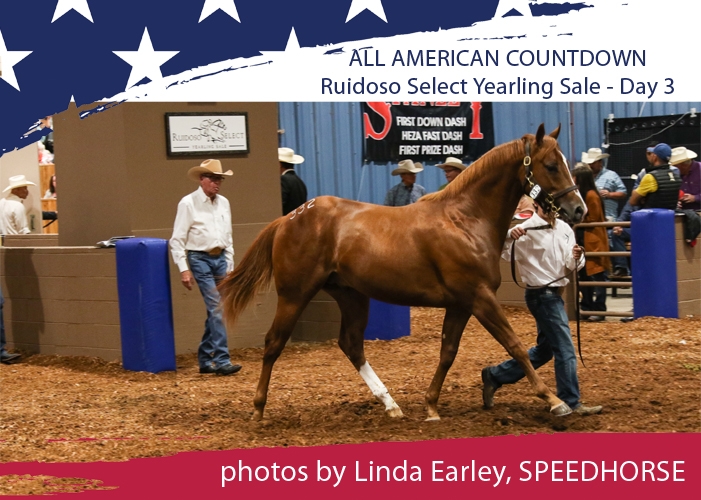 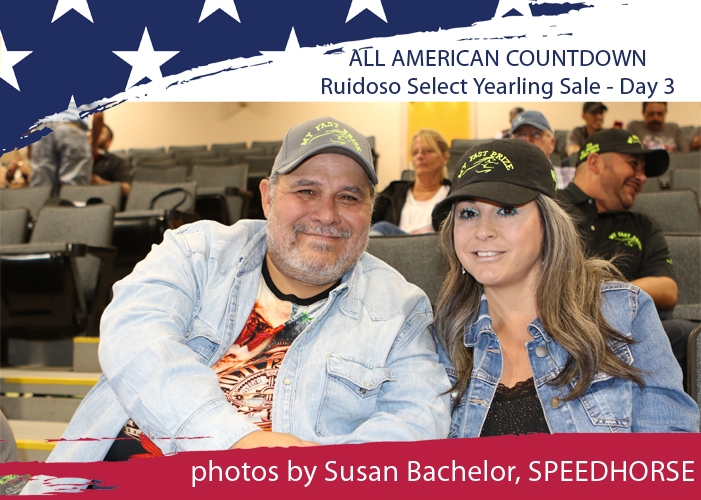 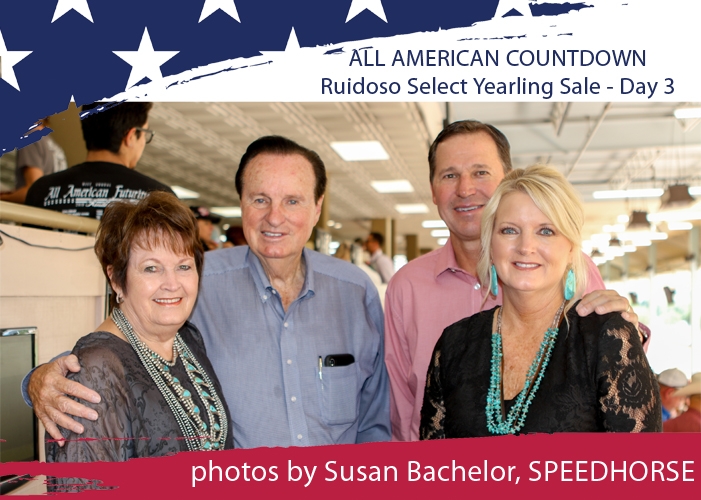 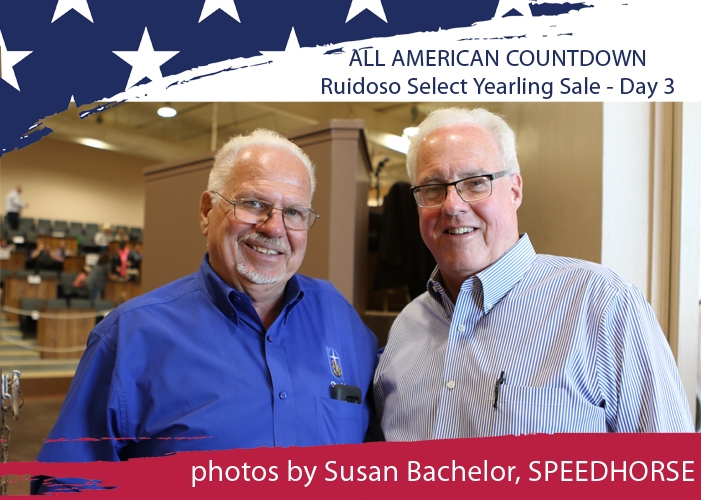 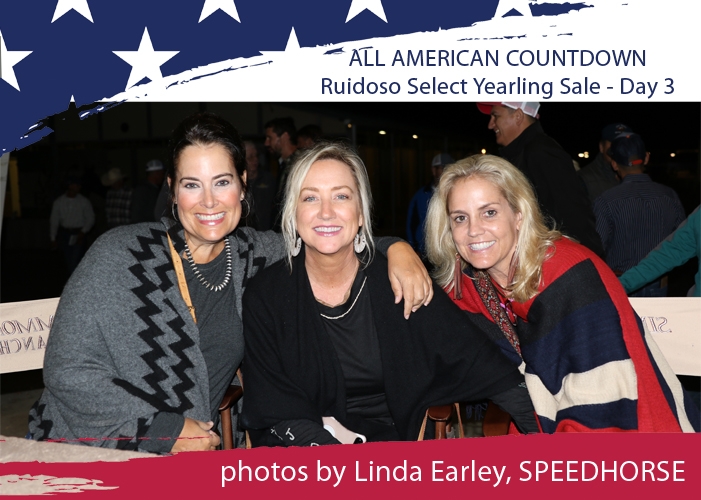 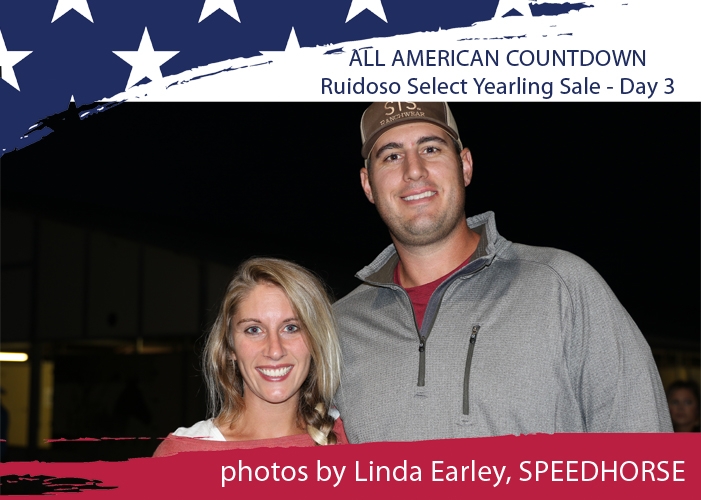 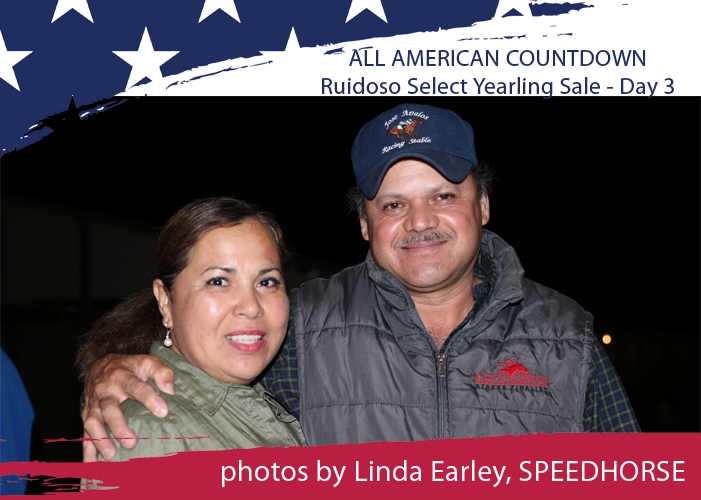 The cars overflowed to the highway, up the winding mountain drive at Ruidoso Downs Race Track Sunday afternoon for the next to the last day of the All American weekend. The excitement could be felt in the air as the shuttles ran nonstop to take race enthusiasts to and from the track for a big day of racing.

A downpour of rain hindered the track a bit, but all races ran without incident and fans were left with the cool air of the Ruidoso mountains. After the races, the rain cleared out and people made their way over to the sale pavilion for the final day of the Ruidoso Select Yearling Sale.

The first Quarter Horse stakes race on the program was race #6, the $100,000 First Down Dash Stakes, which is for horses who competed in the All American Derby timed trials and did not qualify for the finals. The $100,000 stakes race was won by Danjer under Cody Jensen, who also took him to the 2018 All American Juvenile winner’s circle. The brown gelding is sired by FDD Dynasty and out of Shez Jess Toxic by Take Off Jess. Dean Frey is the breeder and trainer of Danjer, and he is owned by Dean Frey, Downtime Enterprises, LLC and Billy Smith. Coming in second was Sumokeonthewater by FDD Dynasty and in third was Symbol Of Faith by Tac It Like A Man. The remaining order of finish was Sera Jess Fine V, PJ Spalsh Of Joy, DF Lord Garvan, Especially Tres PYC, Secret Flying Dream and Fantastic Feature Jr.

Immediately following the sixth race, the Sam Thompson Memorial Jockey Award was presented by Speedhorse Magazine president John Bachelor and the Jockeys' Guild National Manager Terry Meyocks, In-House Counsel Mindy Coleman and Regional Manager John Beech. This year's winner is Esgar Ramirez. Sam “Harold” Thompson, who normally presents the award could not join us this year, so John Bachelor presented the award to Esgar for his outstanding horsemanship and behavior on and off the track. They were joined by past recipients, friends and family.

Spectators took a break from the Quarter Horse racing and enjoyed a couple of Thoroughbred races before race #9 began, which was the $200,000 All American Gold Cup-G1. CDS Wine N Dine owned by German Amaya, bred by Rafter W Stables and trained by Salvador Soto won the All American Gold Cup by half-length under Raul Herrera. CDS Wine N Dine is a sorrel colt by FDD Dynasty and out of Jess Adoration by Mr Jess Perry. Placing second in the race was Tough To Bee by Apollitical Jess and coming in third was Hes Limitless by Corona Cartel. The rest of the field to follow was Hold Air Hostage, Mi Amor Secreto, Papaws Paint, Wagon Chick V, Valiant Rogue, New News and Uptown Dynasty.

Following was race #10, the race many people were looking forward to, the $1,550,855 All American Derby-G1. Rustys Miracle, who drew the short straw in the shake and originally qualified for the First Down Dash Stakes was able to enter the Derby in due to disqualifications and won the All American Derby under Noe Garcia, Jr. Noe won the Bill Reed Memorial on Friday, making that his first career stakes win, and now he has his second stakes win with one of the most prestigious races in the Quarter Horse industry. Rustys Miracle is by Valiant Hero and out of Rustys Lil Lady by Fredricksburg. The sorrel filly is owned by J & SM (Sue May), bred by Bob & Jerry Gaston and trained by Fred Danley. Coming in second was Jess Macho Corona by Corona Cartel and moving up from fourth to third due to a disqualification was Flying Cowboy 123 by Apollitical Jess. The remaining order of finish was Jest Famous, American Hussle, Midday News, Tools In The Sky, Valiant Tiberias, Flash And Roll and America Rules.

After the races were finished, everyone made the short trip over to the sale barn for the final day of the Ruidoso Select Yearling Sale.

The top 5 sellers (not including repurchases) brought in a total of $1,430,000 - two being colts and three fillies.

(One Famous Eagle-Walk Thru Crystal, Walk Thru Fire)

Sold by Julianna Hawn Holt and purchased by Scott Bryant

The highest seller of the entire three-day sale is Hip #399 ORO CRYSTAL - filly (One Famous Eagle-Walk Thru Crystal, Walk Thru Fire) selling for $400,000.

Stay tuned to the SPEEDHORSE All American Countdown Photo Slides for the day we’ve all been waiting for… the All American Futurity!