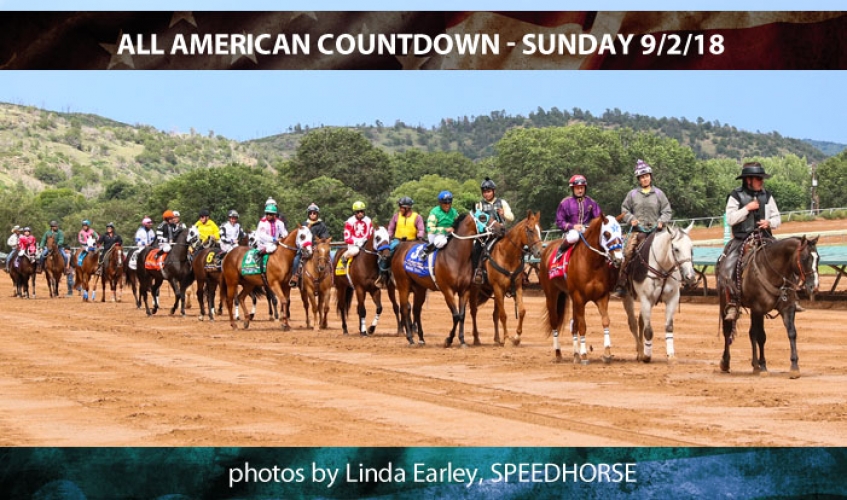 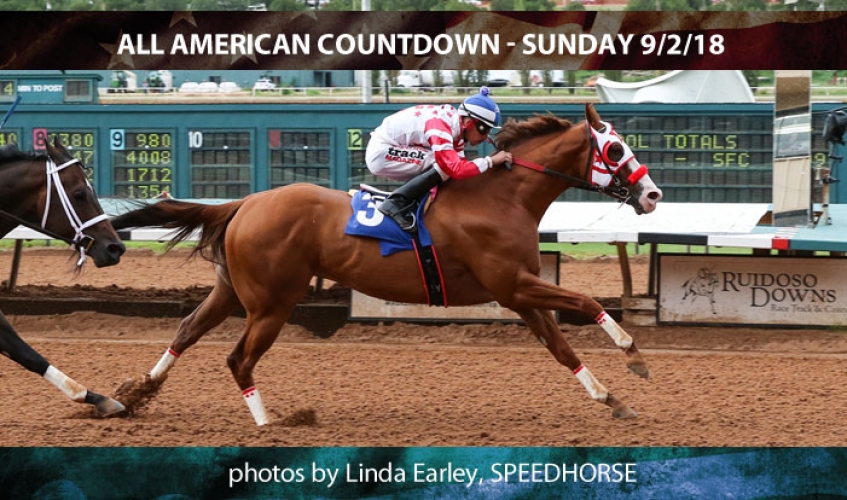 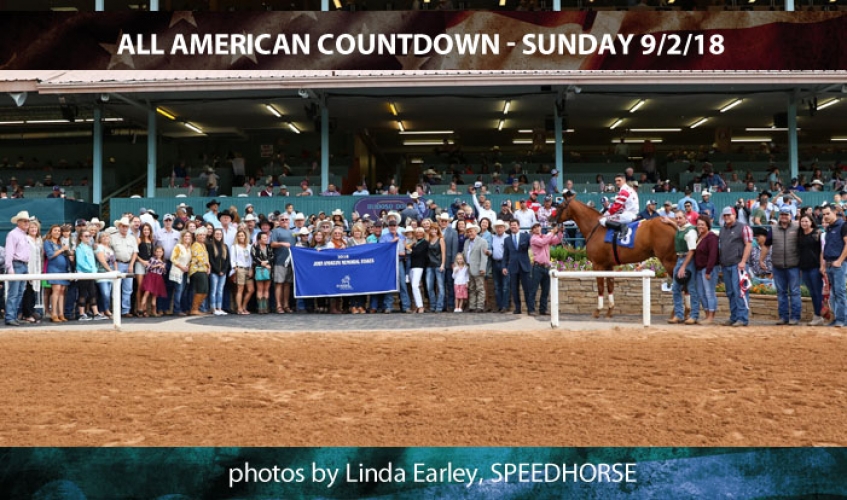 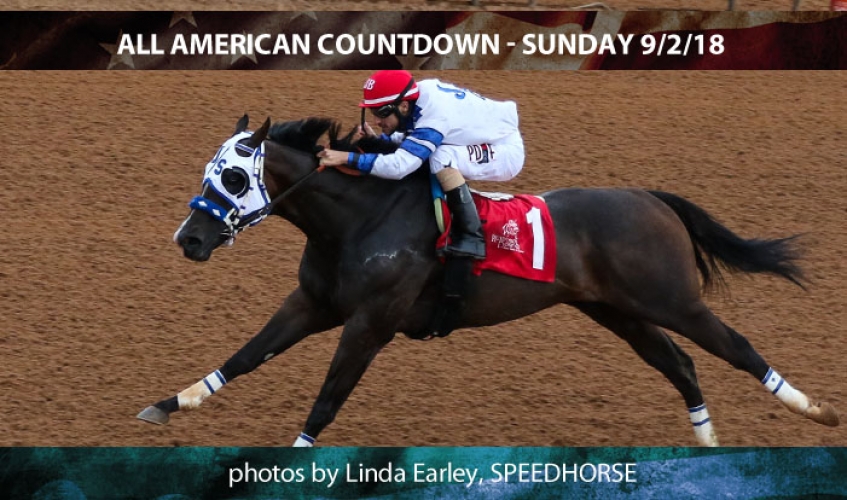 Let There Be Sound wins the $20,000 Bill Reed Memorial 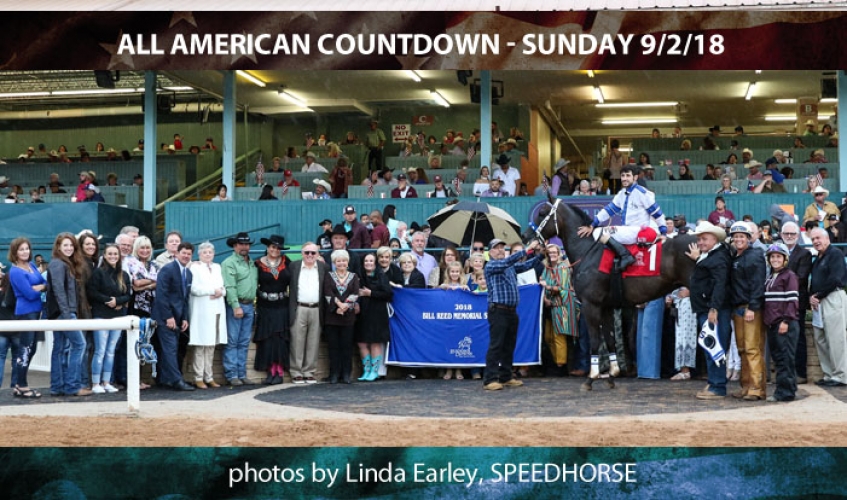 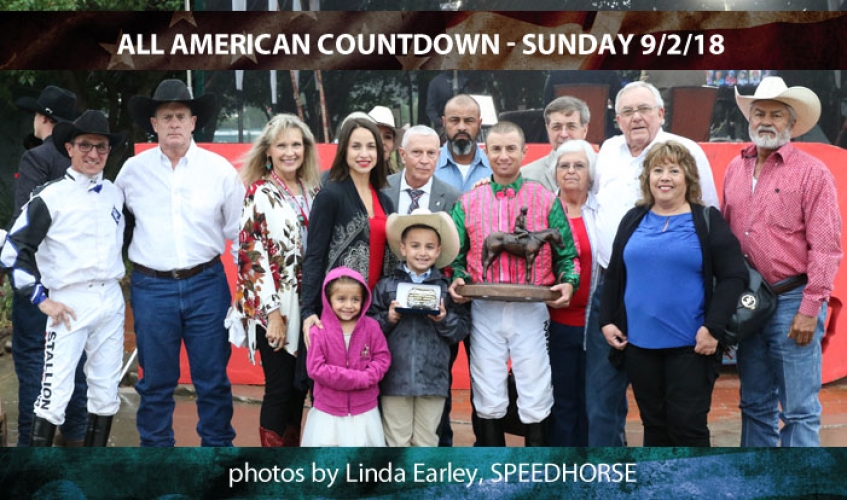 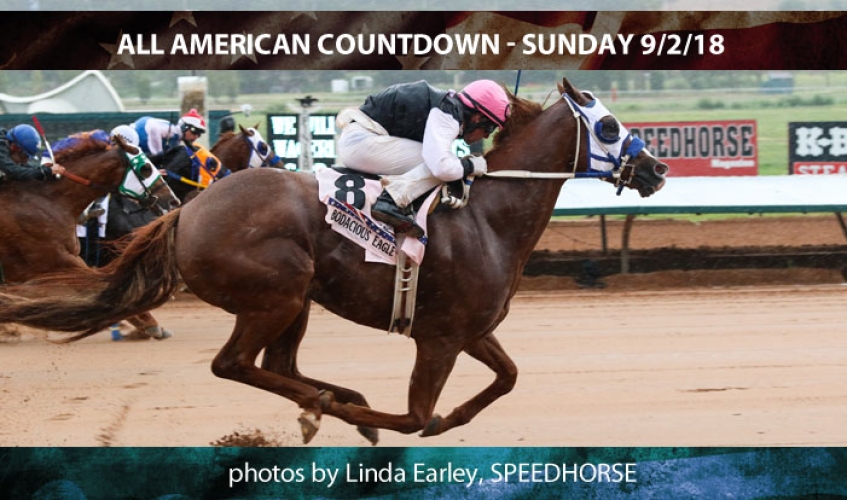 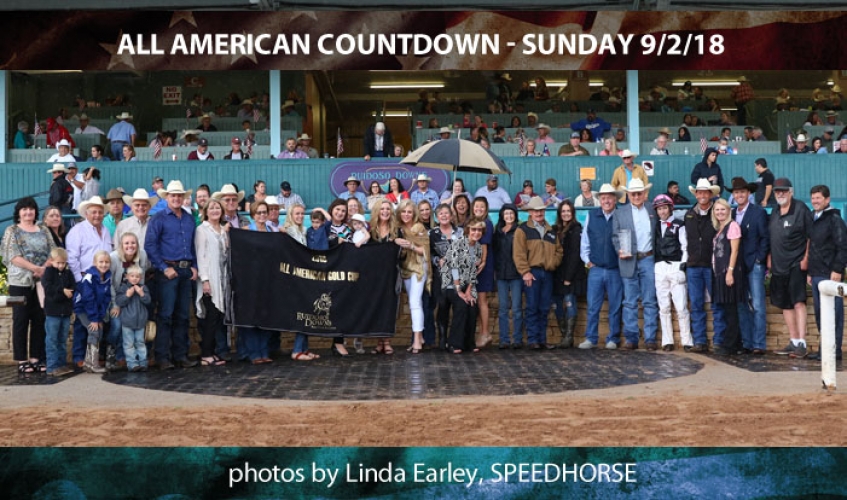 Bodacious Eagle winning connection in the All American Gold Cup-G1 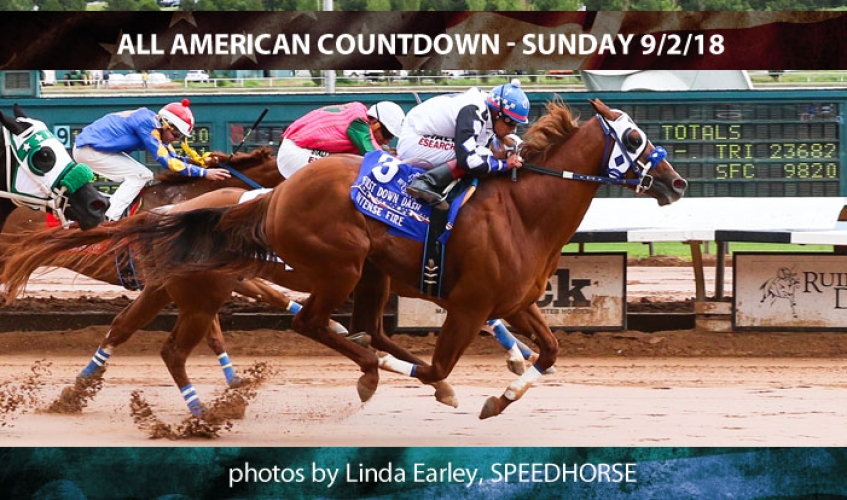 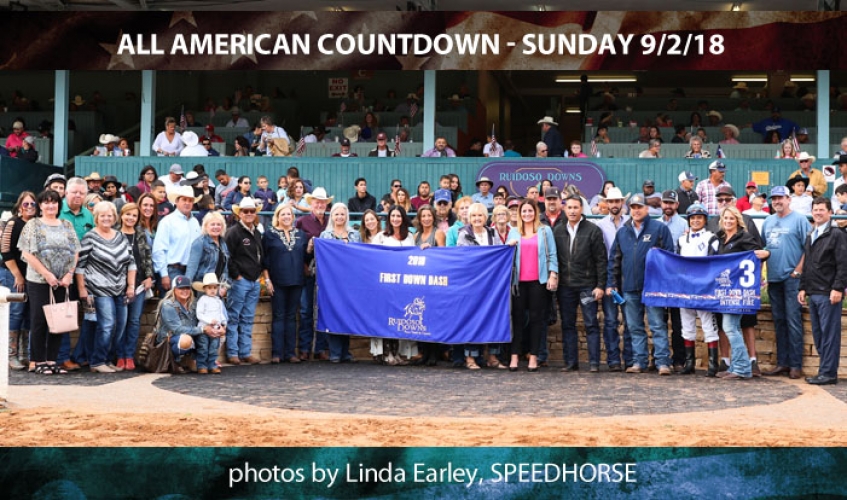 Intense Fire’s winning connections from the First Down Dash 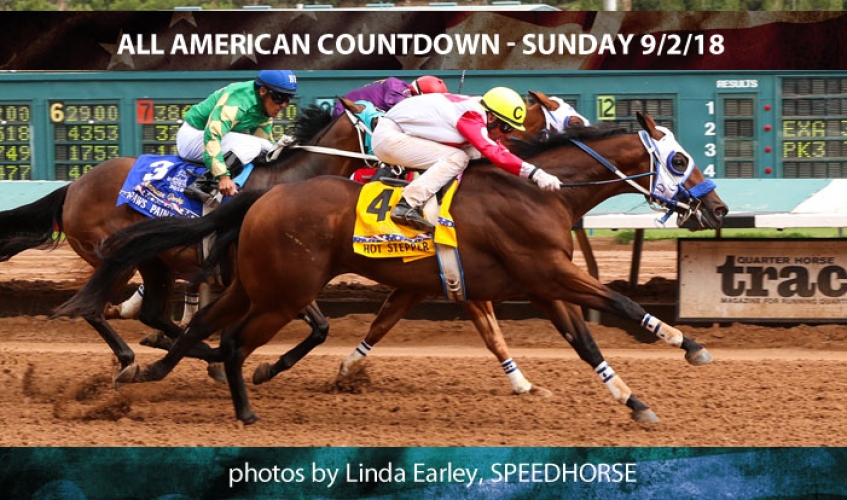 Hotstepper wins the All American Derby-G1 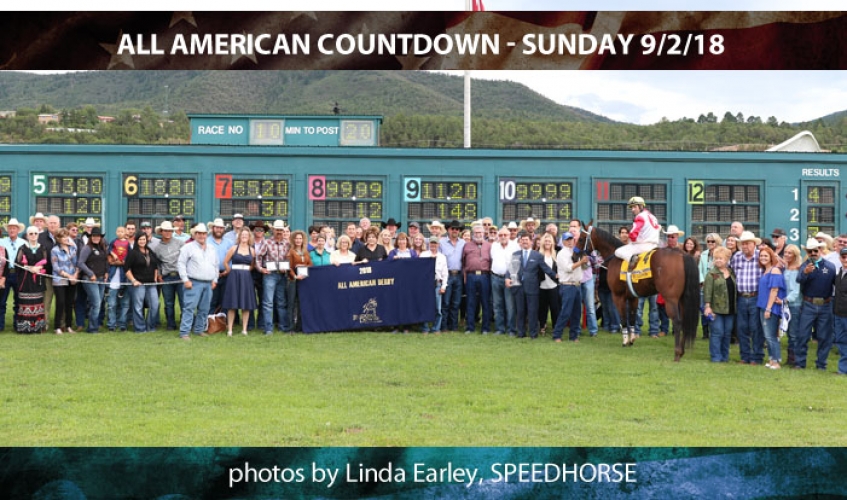 Hotstepper’s winning connections in the All American Derby 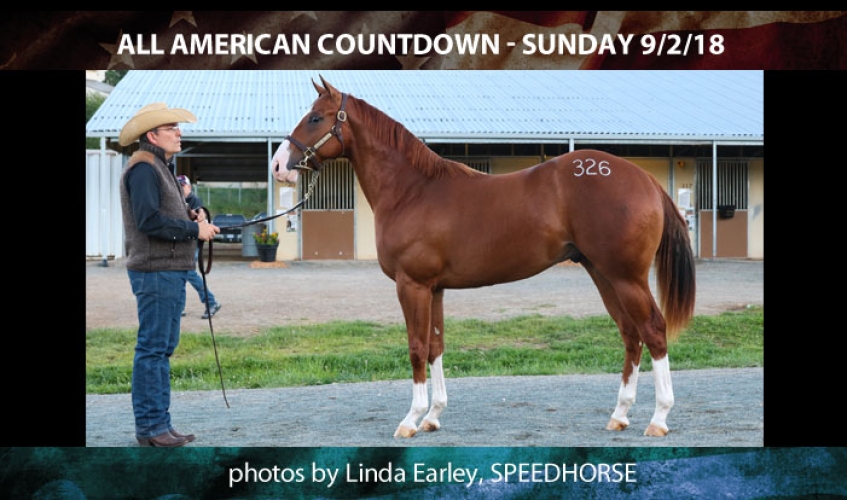 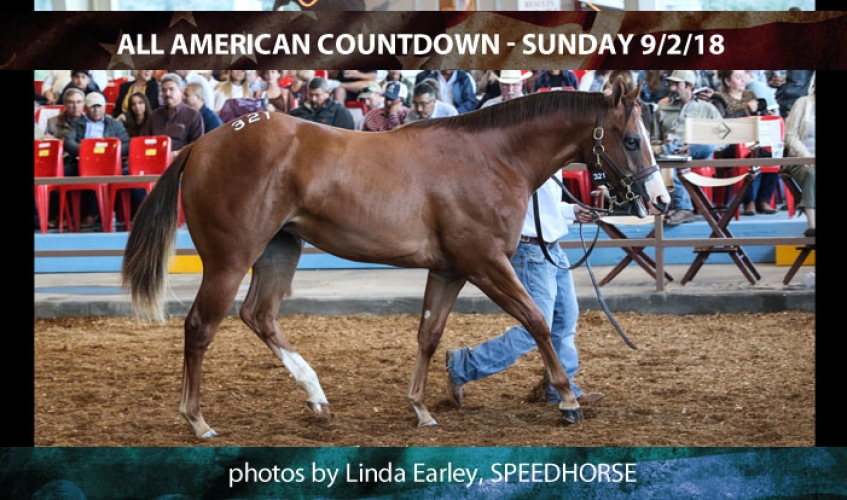 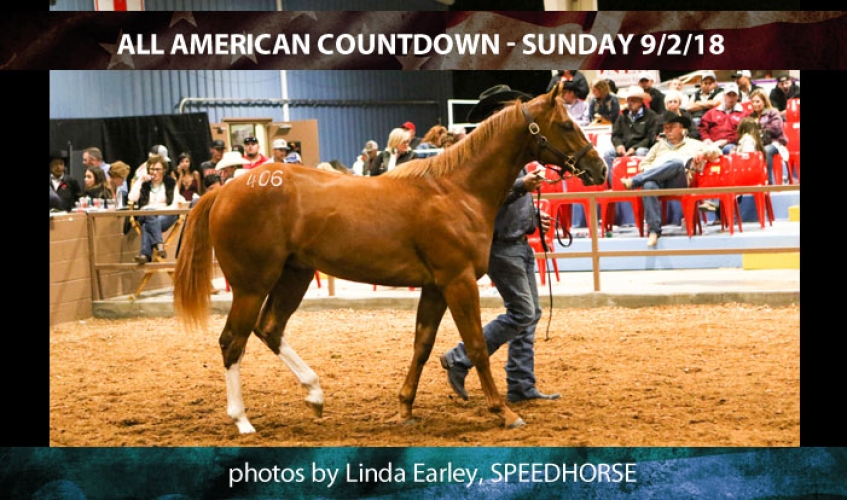 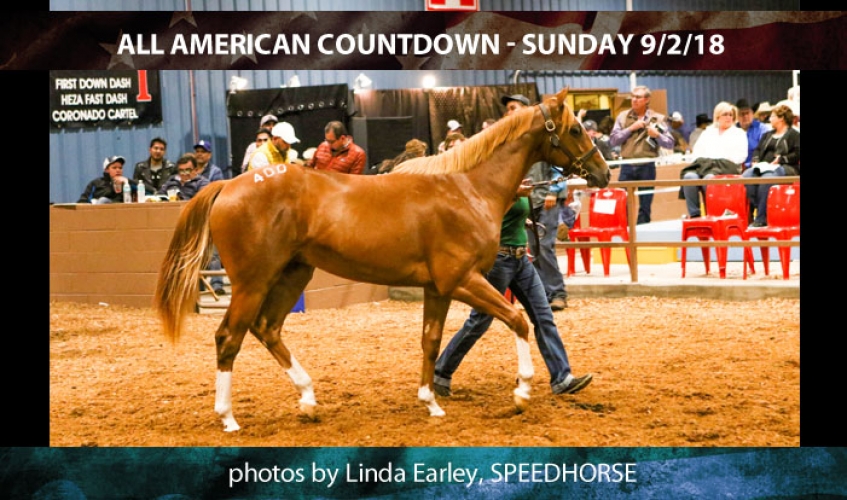 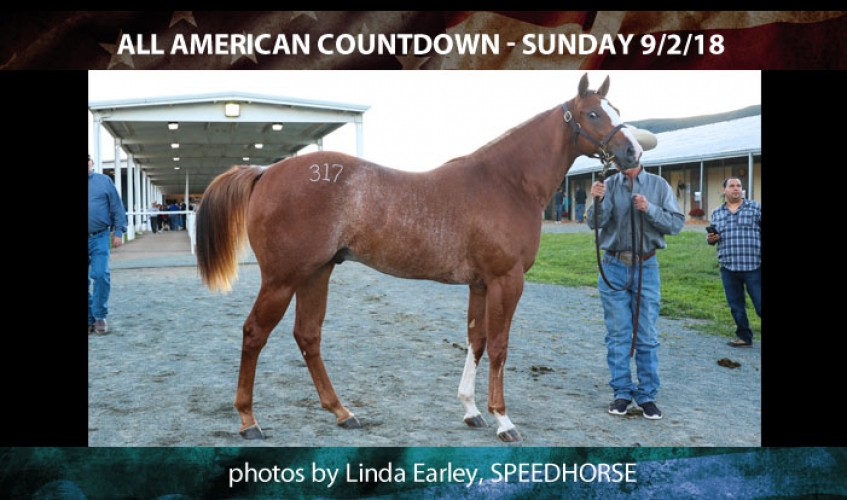 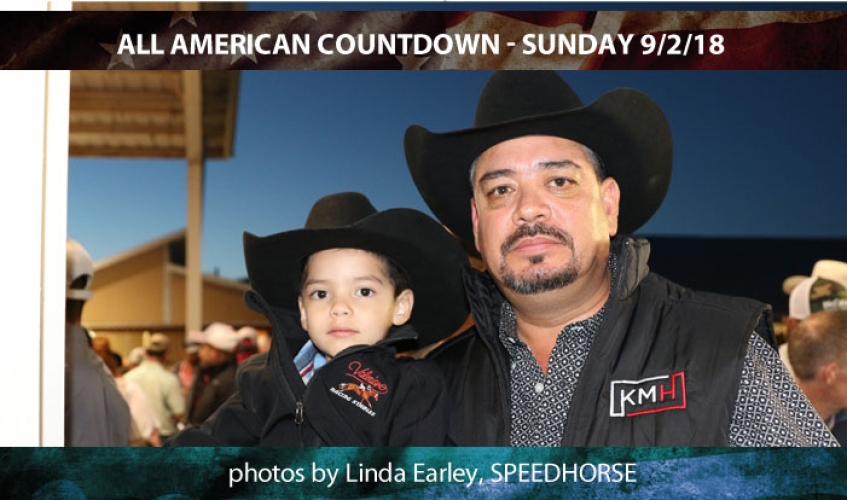 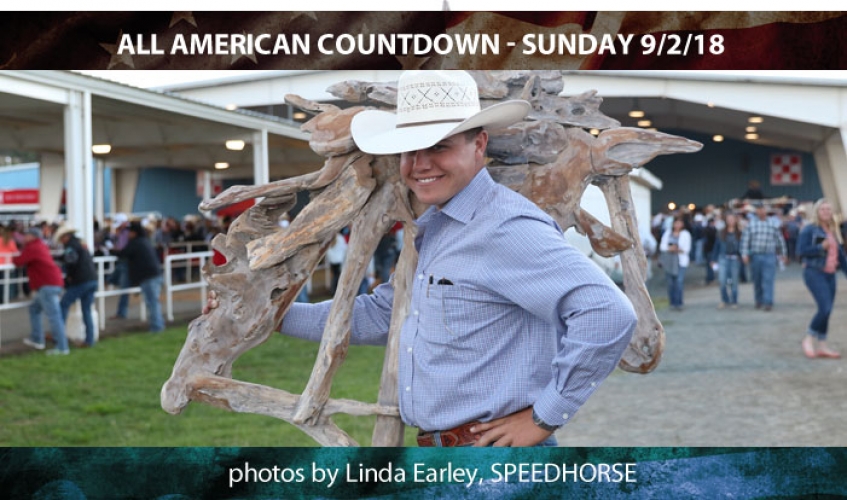 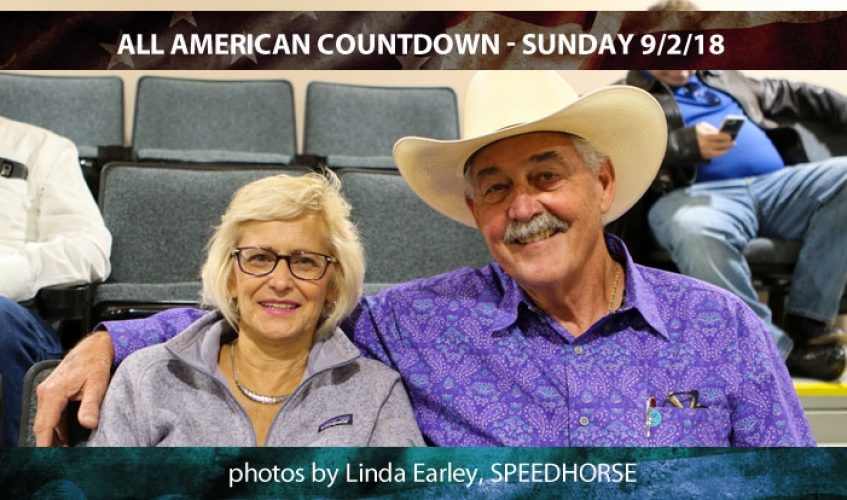 Cars overflowed to the highway at Ruidoso Downs Race Track Sunday afternoon. Shuttles were running nonstop to take race enthusiasts to and from the track for a big day of racing. A downpour of rain hindered the track a bit, but all races ran without incident and fans were left with the cool air of the Ruidoso mountains. After the races were over the final day of the Ruidoso Select Yearling Sale started over at the sale pavilion.

Five out of the eleven races on the program for Sunday were Quarter Horse stakes races, including the Bill Reed Memorial Stakes, All American Gold Cup, First Down Dash Stakes and the All American Derby. Winner of the All American Derby earns a berth to the 2018 Champion of Champions held at Los Alamitos. There is also a new stakes race this year in memory of John Andreini. The John Andreini Memorial Stakes is a 440 yard Quarter Horse race with a $25,000 purse. In addition to the Quarter Horse stakes races, there were two Thoroughbred stakes, including the Ruidoso Downs NM Distaff Stakes and Rio Grande Senorita TB Futurity.

The first quarter horse race on the program was race #4, the $25,000 John Andreini Memorial Stakes. Winner of the race was Boogies Special Dash, a five-year-old gelding by Walk Thru Fire out of Boogies Special by Strawfly Special. He was bred by Jaime Gomez, owned by Kenneth Ruthardt, trained by Wes Giles and ridden by Adrian Ramos. Following in second was Kowboy Jim by FDD Dynasty out of Counting On You by Mr Jess Perry. Placing third was Llano Senator by Louisiana Senator out of Eyesa Lil Cuervo. The remaining order of finish was Favored One Sweet by One Sweet Jess, Time To Jazz by One Sweet Jess, Born To B Bad by Freighttrain B, Don Quixote by Stel Corona.

Next up on the program was race #6, the $20,000 Bill Reed Memorial, running at 870 yards for mixed breeds. Let There Be Sound won the Bill Reed Memorial under jockey Benito Jude Baca. The four-year-old gelding was bred by Black Oak Farms, owned by Louis and Corrine Howard and trained by John Stinebaugh. Second to Let There Be Sound was Billy Big Rook by Rock Solid Jess out of Fly N Chix by Chicks Beduino. Placing third was Mahoney N Tackleberry by Favorite Cartel out of Fountain Bleu by Jess Louisiana Blue. Rounding out the field in order was D E Wagons Strawfly by Strawfly Special, Tag Yur It by Roll Hennessy Roll TB, First Place TB by Giant’s Causeway, Ranger The Stranger by Mighty B Valiant and DM Nate Dog by Gonna Ro Sham Bo.

Between races 6 and 7, the Sam Thompson Memorial Jockey Award was presented by Speedhorse Magazine president John Bachelor and the Jockeys' Guild, National Manager Terry Meyocks, In-House Counsel Mindy Coleman and Regional Manager John Beech. This year's winner is Ricky Ramirez. Sam “Howard” Thompson presented the award to Ricky for his outstanding horsemanship and behavior on and off the track. They were joined by past recipients, friends and family.

Race #7 was the $200,000 All American Gold Cup-G1. Bodacious Eagle, a six-year-old gelding by One Famous Eagle won the Grade 1 race under jockey Cody Jensen. He is out of Bodacious Dream by Corona Cartel. He was bred by La Feliz Montana Ranch, LLC, owned by Johnny Trotter and trained by Michael Joiner. Coming in second was Rock About It by Rock Solid Jess out of Not Sable Shes Rose by Corona Blackdiamond. Trailing in third was Paint My Pilot by PYC Paint Your Wagon out of Ms Pilot Point by Splash Bac. The remaining order of finish is Political Attraction by Apollitical Jess, Firing Tools by Walk Thru Fire, High Plains Perry by Mr Jess Perry, In Class by Jesse James Jr, Mr Apollitical Dash by Mr Jess Perry, Myst Fit by Separatist and Tough To Bee by Apollitical Jess.

Race #8 was the First Down Dash Stakes, which is for horses who competed in the All American Derby timed trials and did not qualify for the finals. The $100,000 stakes race was won by Intense Fire and jockey Omar Reyes. The Clint Crawford trained colt is by Walk Thru  Fire out of Remember Me Rose by Corona Cartel. He was bred by James Markum and Steve Burns and is owned by Raymond Merrill, Bobby Jack Merrill and Gregory Cullum. Behind Intense Fire was Hierarchy (FDD Dynasty - Platinum Performance by Strawfly Special) and placing third was Believe Me Irene (Valiant Hero - Financial Leverage by Mr Jess Perry). The remaining order was One Famous FDD by One Famous Eagle, Ruler Of The Realm by Apollitical Jess, Mi Amor Secreto by The Louisiana Cartel, Jacky Martin 21 by FDD Dynasty, Scoopie Jess by One Sweet Jess, Overhauling by Feature Mr Bojangles and Fooze Jr by Foose.

After the races were finished, everyone made the short trip over to the sale barn for the final day of the Ruidoso Select Yearling Sale.

The highest seller of the entire three-day sale is Hip #326 Good Candy P – colt (Good Reason SA-Send Me This Wagon by PYC Paint Your Wagon) selling for $340,000. Between Hip 345 & 346, R.D. Hubbard donated the Kiss My Hocks breeding back to the auction and it was purchased for $6,000. It was then donated one more time and finally bought for $5,500. A breeding to Hez Our Secret was donated by Lazy E Ranch and purchased by Ben Hudson. Proceeds for the breedings go towards Ruidoso Downs Race Track Foundation which supports the Ruidoso Downs Racehorse Hall Of Fame, the Lincoln County Cowboy Symposium and a future scholarship program.