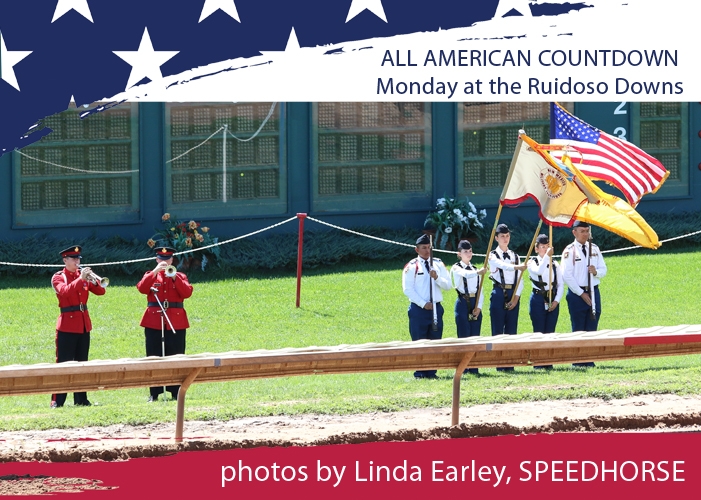 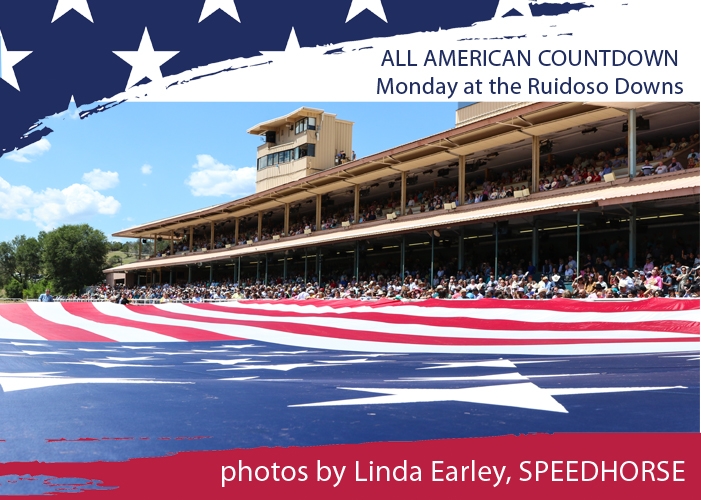 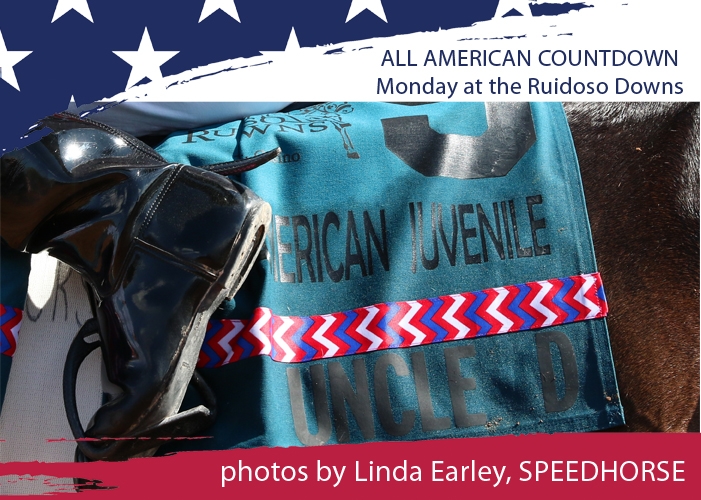 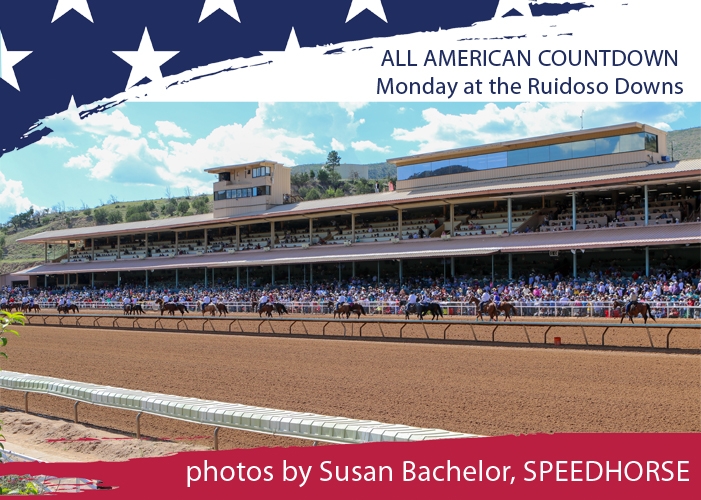 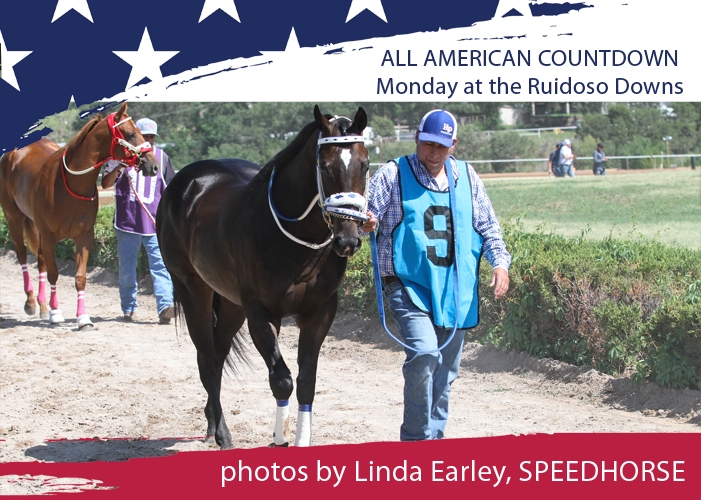 Uncle D before the All American Juvenile 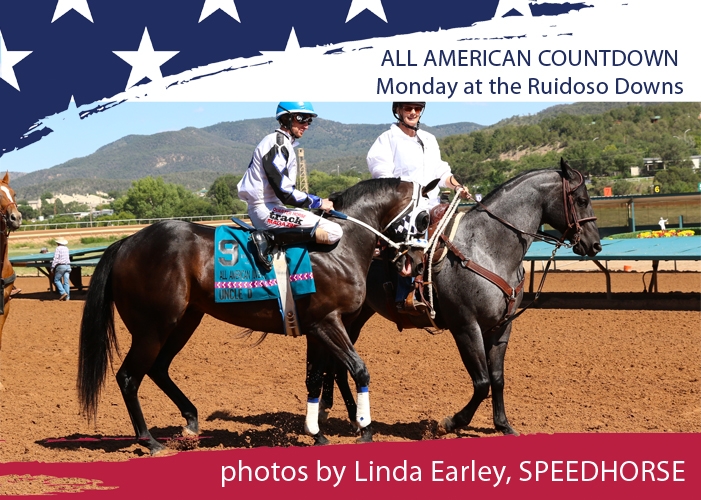 Uncle D post parade for the All American Juvenile 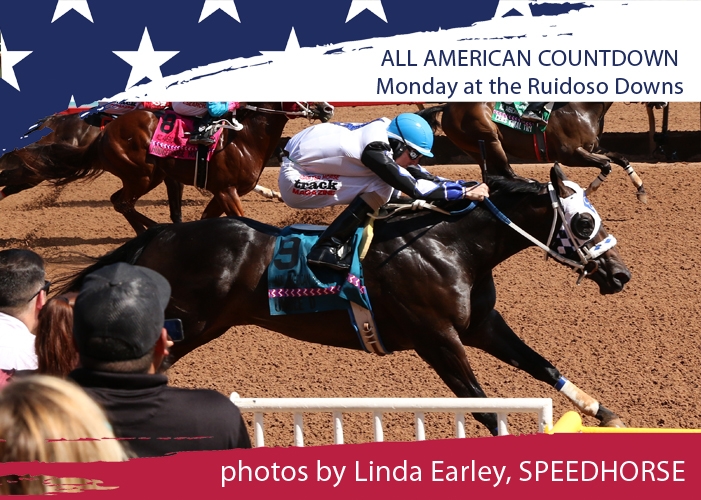 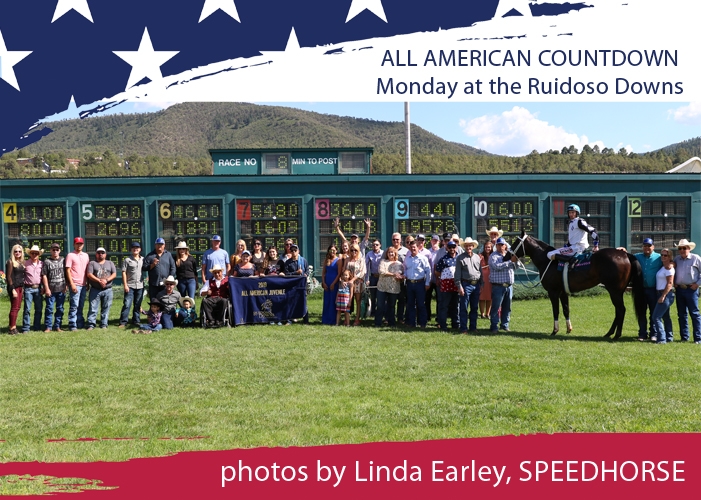 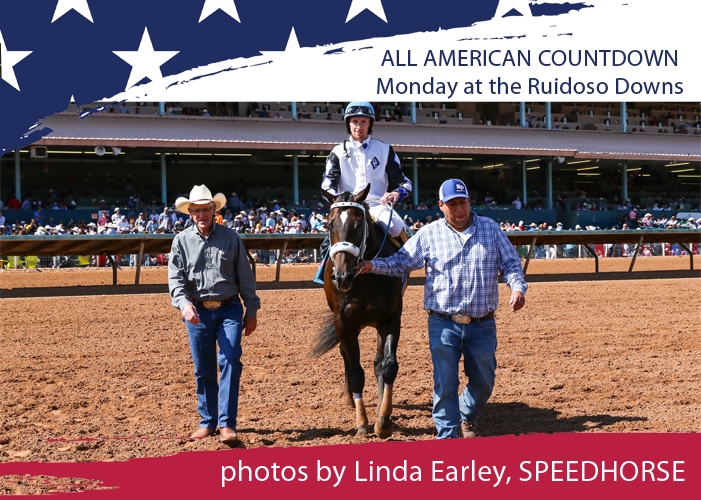 Uncle D coming back from winning the All American Juvenile 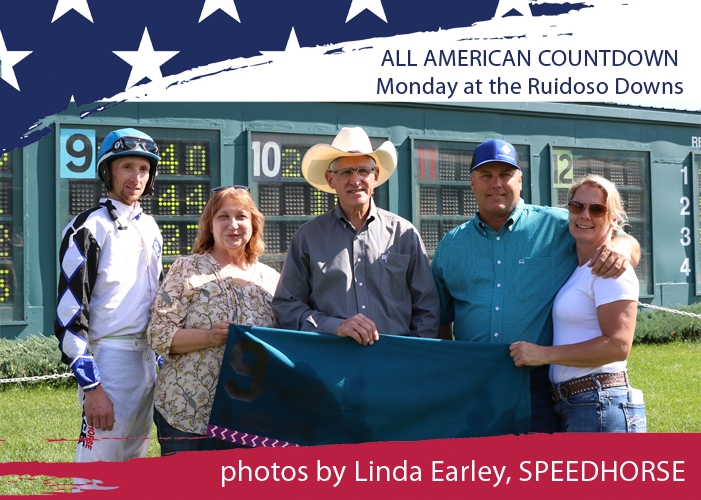 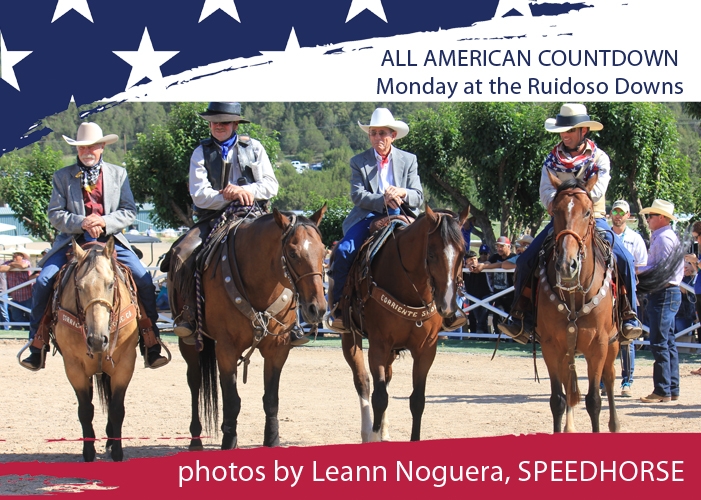 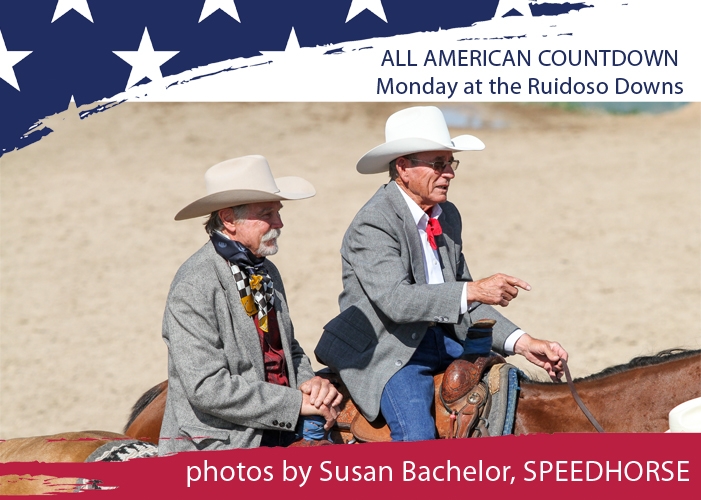 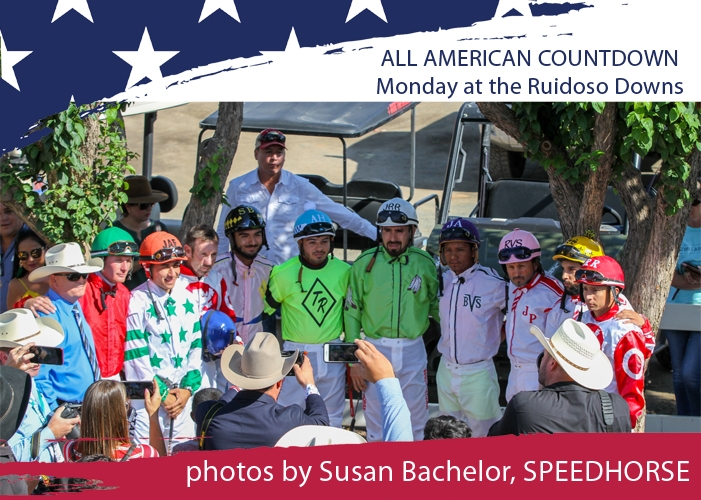 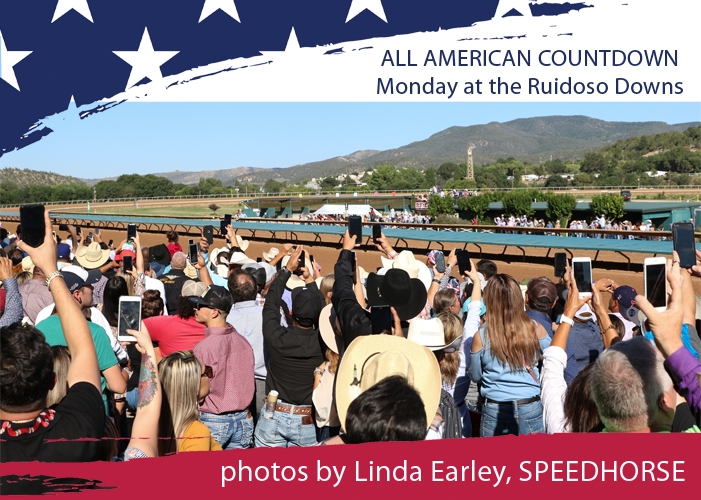 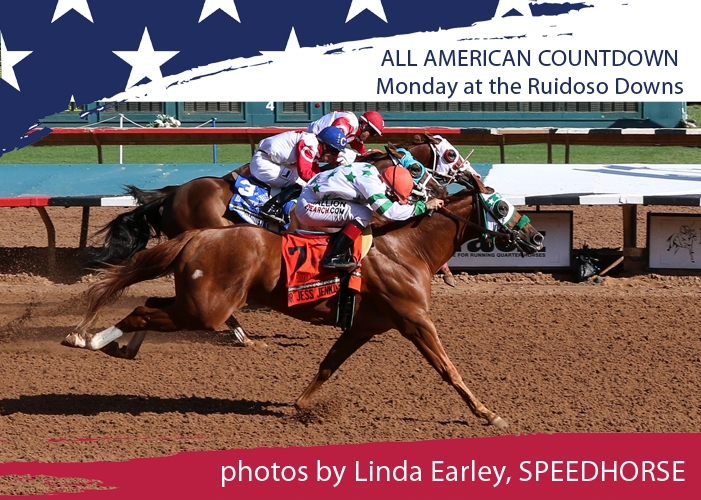 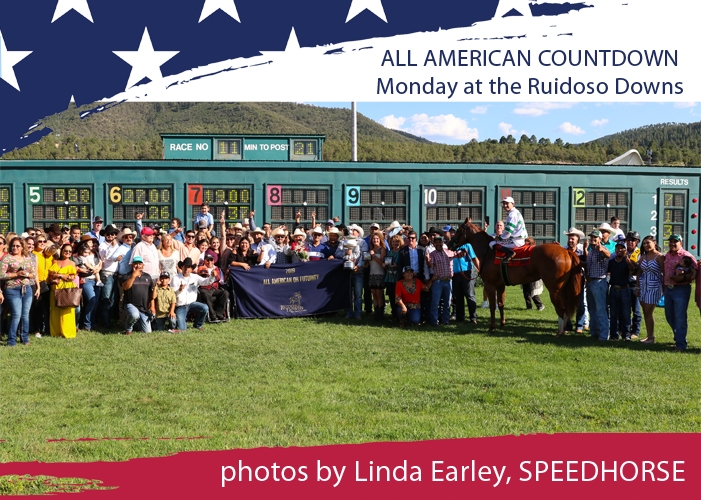 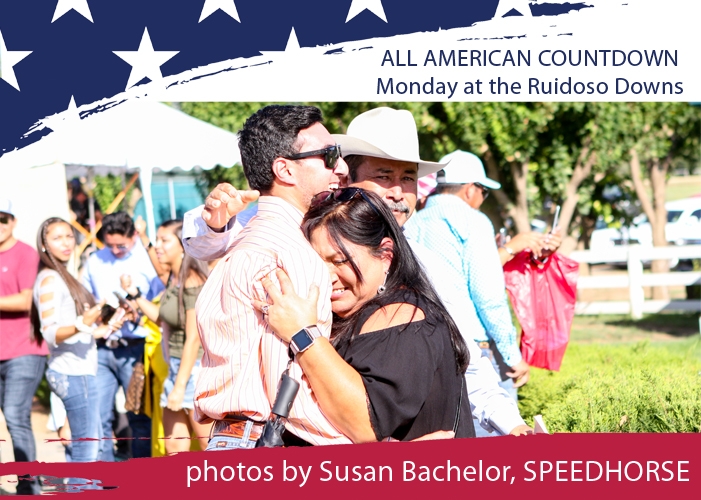 Angel, Minny and Jaime Flores overwhelmed with joy after James Flores wins the All American Futurity 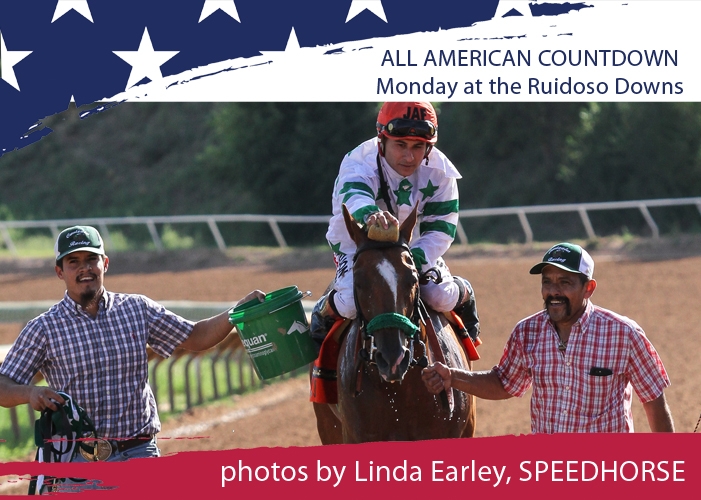 Mr Jess Jenkins cools off after winning the All American Futurity 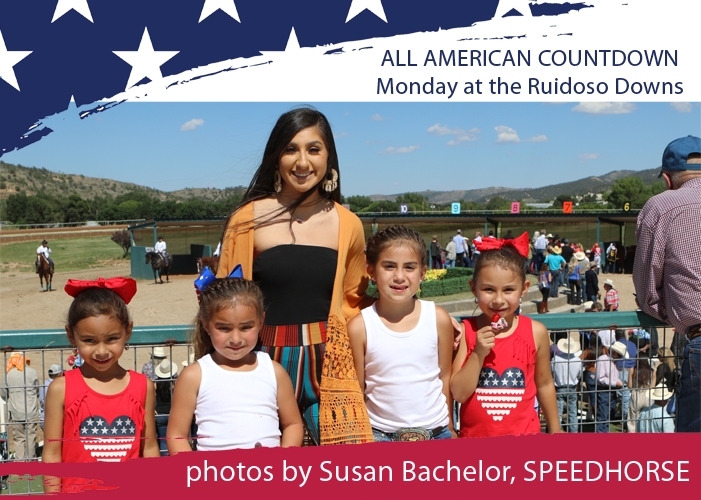 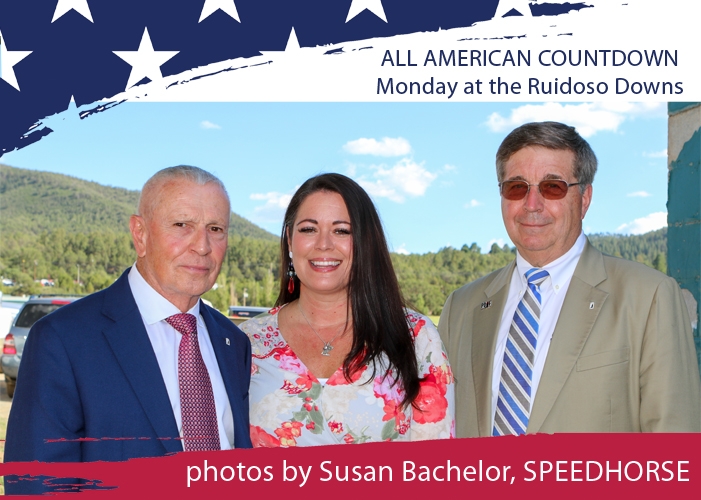 There was a line of traffic mid-morning Monday getting to Ruidoso Downs Race Track on Labor Day for the long awaited $3,000,000 All American Quarter Horse Futurity-G1. Races began at noon this year. There were 12 races scheduled on the program, but only 5 of them were for Quarter Horses. The two top Quarter Horse stakes races for the day were the All American Futurity-G1 and All American Juvenile. The New Mexico Military Institute color guard performed the Star Spangled Banner to open the ceremony. Later Ruidoso friends and staff waved a giant flag that spread across the racetrack while God Bless America played in honor of our troops. Following the ceremony, the sixth race was the Tribute To The Troops Claiming Stakes, won by Zedeco by Sir Runaway Dash, under jockey Jaime Leos.

Race 8 was the All American Juvenile, won by crowd favorite, Uncle D. Uncle D has lit the board 6 out of 6 career starts with 4 wins and 2 seconds. The brown colt is by Corona Cartel and out of Little Surfer by First Down Dash. He is owned by Cavenaugh Quarter Horses, LLC, bred by McColee Land & Livestock, LLC and trained by Clint Crawford. Jockey Cody Smith rode Uncle D to the finish line in :21.397, clocked a 95 speed index and defeated Cers Final Try by One Dashing Eagle by a neck. Coming in third was Hodgepodge Hocks by Kiss My Hocks. The remaining order of finish was Kiss This Flying By, Paramounte, Kiss Thru Fire, Eagle Acting Up V, Target Locked, Katch This Bird and Shezgothelook.

The post parade for the highly anticipated Race 10 All American Futurity-G1 was lead by Gunsmoke actor Buck Taylor “Newly” and 1971 All American Futurity winning jockey Johnny Cox. The winner of the $3,000,000 All American Futurity-G1 was Mr Jess Jenkins, making this his second win of the year from 5 starts. The sorrel gelding took the lead at second call to win in a photo finish under jockey James Flores. He is by Apollitical Jess and out of Fetching Image by Dashing Cleat. Mr Jess Jenkins is owned by Jose Ernesto Guzman and Rito Sosa, bred by VH Harman, Jr. and Robert Moudy, III and trained by Marcos Carrizales. Placing second to Mr Jess Jenkins was Mister Riptide by Woodbridge and coming in third was Determined One by Hes Relentless. The remaining order of finish is as follows, Lil Miss Sashay, My Fast Prize, Gonna B Famous, Passionate Paris, Avyator, Elm Creek Khrome and DF Mischievious Jess.

The All American Weekend has come to an end. We hope you enjoyed viewing the weekend’s festivities and look forward to seeing you all next year for the 2020 SPEEDHORSE All American Countdown. If you like any photos you see (or don’t see) and would like us to mail you a photo from the All American weekend, email [email protected] to find out more.